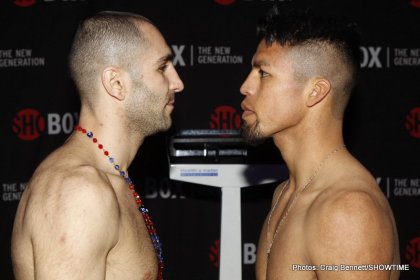 Hovhannisyan came into the contest with title aspirations and needed a meaningful performance over a game fighter in Perez. After a bit of a feel out process in the 1st round, Perez began to find success going to the body. He wasn’t dominating, but he was certainly dictating the action to a certain degree.

Perez was working his game plan to a tee, but Hovhannisyan stayed disciplined and wasn’t pressured into an unfamiliar fight. Hovhannisyan sat back and showed his desire to be the boxer in the ring, which paid off with some stiffening counter shots that landed on the behalf of Hovhannisyan. Still, it was Perez’s aggressive style that seemed to be the underlining story developing throughout the fight.

Into the 4th round, Hovhannisyan began to step it up and land, but he was still waiting too long in between shots. In the final minute of the round both men geared up for some heated exchanges, but it was difficult to say who was getting the better of it in real time. A break in the action caused by an accidental low blow from Perez allowed Hovhannisyan to regroup and finish the round strong.

The ShoStats proved that Hovhannisyan was throwing and landing well below the division average and Perez took full advantage by going to the body. He took too much in the 5th however, as Perez landed yet another low blow and this one was enough for referee Ray Corona to deduct a point from Perez in a round where Perez was separating himself from his opponent. They closed the round out in style with both men landing big shots in the final minute, but it was apparent that Perez was getting the best of it.

The action persisted and there were some back and forth momentum swings, but it seemed as though every time Hovhannisyan managed to find some success Perez would dig deep and take the fight back. Into the last round, both men showed the will to win and fought like the round would decide the fight. Hovhannisyan landed big shots, but so did Perez; what separated the two had to be the body attack from Perez.

The final bell sounded and the judges came back with scores of 96-93 twice and 95-94 all for Perez, giving him the unanimous decision victory.

A pair of undefeated prospects in the middleweight division opened up tonight’s telecast when former Bahamas Olympian Tureano “Reno” Johnson was able to route Willie Fortune to a unanimous decision victory.

It was a rather odd start to the fight as Johnson appeared to be in a very emotional state during his ring entrance and tears were seen falling from his eyes as his introduction was announced. Perhaps Fortune noticed too because from the second the bell rang Fortune was pressing the action. He came out aggressive, but he was finding success with his somewhat abrasive approach.

However, the story would soon began to change as Johnson found ways of settling back into his own and transcended the fight into a pace that he was much more comfortable with. From that moment on, Johnson would use a somewhat mixed attack to keep Fortune where he wanted him and then Johnson would load up on big lefts and heavy rights.

Johnson put rounds in the bag and built an unsurmountable lead over Fortune. But Fortune never stopped trying, even if his efforts weren’t very effective, still he showed heart. There were moments where the two fighters settled into exchanges that were more barbaric than poetic.

The scores were as anticipated and all 3 judges scored the fight 80-72 for Johnson, moving his record to 14-0.