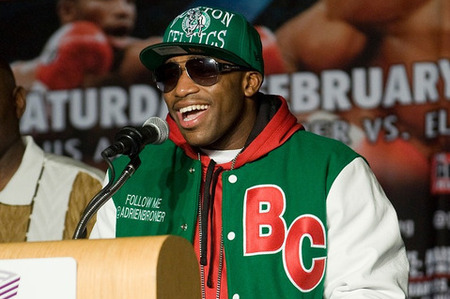 The uniqueness of a fighter like Adrien Broner is unparalleled to the usual candidates that make up boxing’s ever changing prospect list. The typical fighter that warrants mention on a list made up of prospects is usually based on in-ring ability. This is because the information available on up-and-coming fighters is usually vague and limited to their attributes tested against bleak opposition.

Adrien Broner is different; in fact, he really isn’t even a prospect anymore. Broner is now on that list of potential stars with the ability to perhaps be the next big thing in boxing. His talents in the ring are obvious; Broner possess some really fancy footwork to go along with his hand speed and ability to put his punches together well. However, it’s Broner’s demeanor and characteristics outside the ring that has really boosted his stock in the boxing world.

From the one-liners in his post-fight interviews to the witty character Broner personifies, it’s easy to tell that becoming a star will not be Broner’s problem. In all honesty, Broner is fortunate enough to have a well-documented blueprint from the flamboyant fighters that came before him. Guys like Ali and Mayweather Jr. have transcended that portion of superstardom and Broner seems like he has the type of character to take that flamboyance to another level.

Thaboxingvoice.com recently spoke with Adrien Broner on the Thursday radio show and he discussed many topics. Broner mentioned that he would be moving up to 135 after his Saturday fight with Vicente Escobedo. That topic coincided with the potential showdown between him and Yuriorkis Gamboa.

“I don’t need Gamboa; Gamboa needs me because I have the ability to go to 135, 140, 147 and even 154 if it’s the right opponent. He so limited because of his size and he can’t really jump those weight classes,” Broner said.

It also goes without saying that Broner is creating a brand for himself each and every time he steps into the ring. It’s a combination of his performances and the dynamic character he displays after the fact.

“I’m an entertainer; I come off to a lot of people like I’m being cocky. A lot of people love it, some people hate it, but even the ones that hate it still watch because they want to see me lose,” Broner said.

He’s right; the kind of popularity he has garnered is real and meaningful. It is the same kind of love/hate relationship many fans feel towards Floyd “Money” Mayweather Jr. That kind of business model is smart, effective, and certainly entertaining.

Broner spoke briefly on his next opponent, Vicente Escobedo.

“I know he’s going to come to fight; he’s a world class fighter. I don’t watch tape on guys, I just make sure I’m well prepared and if I’m prepared there is nobody out there that’s going to beat me. Whatever Escobedo brings I’m going to be prepared for.”

It seems as though Broner isn’t underestimating Escobedo and he certainly isn’t underestimating his own skills. It’s a good thing Broner knows how good his opponent is because many don’t. From all the dialogue going around on the internet, it would seem most people assume that Escobedo won’t present any danger as an opponent for Broner. That’s simply not true. The fact is Escobedo has some good technical ability to go along with his willingness to bang. Don’t be misled, Escobedo isn’t a brawler by any means, but he can make a tough fight for anyone- Broner included.

Broner mentioned he had been sparring bigger guys in the gym, more than likely in preparation for his move up, but it probably works on another level with his prep-work for Escobedo-who fights as the bigger man at times.

I won’t be trite or delusional, the fact is this fight is Broner’s to lose; I just feel that it is worthy of the HBO “Boxing after Dark” main event and should be slightly more competitive than Broner’s recent fights. It’s obvious that Broner is currently on path to making the transition to HBO’s World Championship Boxing soon enough, and then who knows? Broner could be a star one day, but it’s too soon to know for sure if he could draw PPV buys.  The question is does Broner think he could draw PPV buys and if so, how long down the road will it take for him to become that kind of boxing presence.

“Maybe the end of this year or the beginning of next year, I got a great fan base. Nobody’s doing what I’m doing in the boxing room. I told HBO when my PPV dates come you can’t put me on 24/7, you going to have to call it 25/8 because you need another day and another hour for me; or you’re going to have to make a whole new show for me called HB-Broner, it’s not even called HBO anymore, it’s called HB-Broner,” Broner said.

We asked Broner about the comparisons he draws to Floyd Mayweather Jr. and specifically the encounter he got into with his last opponent, Eloy Perez, and how it compared to the physical altercation that Floyd had with Victor Ortiz.

“I really don’t think that me and Floyd are nothing alike, we train similar and alike, but we’re totally different guys. He has his ways of doing things and I have mine. I know I’m going to be the best and I know that I am the best so that’s how I’m going to act and if you don’t like it then oh well,” Broner said.

You can teach a fighter how to jab, hook and uppercut and sometimes the fighter does it well enough to parlay that into a career. Sometimes it will go deeper and a fighter uses the skills he was taught combined with the natural ability he possess, thus becoming a champion. However, you can’t teach star like qualities and you can’t teach a person to shine as bright as the lights they’re under.

The kind of flamboyance Adrien Broner possess is unmatched by anyone in his position. Even Mayweather wasn’t really “Money” Mayweather until a few years back. Broner possess the kind of skills necessary to becoming a star boxer, but he also possesses the kind of charisma that could make him a star athlete. If Broner becomes a crossover star like De La Hoya, Pacquiao, and Mayweather, it will be because since birth he’s been grooming himself to become one.

We talk about fighters all the time, whether or not they got the “goods.” In Broner’s case, it’s apparent that he is a special kind of fighter. So it may be when as opposed to if he ever makes it to the top of the sport. No fighter is ever a guarantee, but I’d be willing to bet that the moment America lays their eyes on “The Can-Man” they’ll be captivated, regardless of whether they hate him or love him; the guarantee is they’ll be paying attention for years to come.

For Full Audio of this interview click here: http://www.blogtalkradio.com/thaboxingvoiceradioshow/2012/07/12/adrien-broner-cornelius-bundrage-jose-luis-castillo