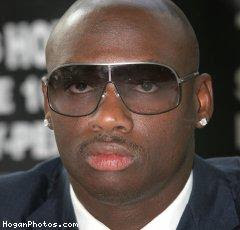 Former light heavyweight champion turned cruiserweight contender Antonio “Magic Man” Tarver has tested positive for the anabolic steroid drostanolone, this is according to the California State Athletic Commission. The pre-fight urinalysis submitted by Tarver was conducted by the CSAC for his June 2nd fight against Lateef Kayode.

Thaboxingvoice.com spoke with a representative of the CSAC and they did confirm the positive test came from Tarver’s “A” sample. The commission said that they do not test the “B” sample unless it is requested from the positive fighter (in this case Tarver) and that request must be in the form of an official appeal. Tarver has since said that he will appeal the results and submit every substance he’s taken that could have caused the positive result (which he referred to as an “honest mistake”). Tarver wasn’t available for comment, but he did release a statement:

“I have always been a proponent of a clean sport and an advocate for the most rigorous drug testing in boxing. The positive test results came as a complete surprise to me today. I will be examining every potential cause and ultimately, I am confident that my fans will see that I was not at any time attempting to gain an unfair or illegal advantage in my performance.”

Many are already speculating, including Kayode, that the steroid may have aided Tarver in his late fight effort back on June 2nd. The fight was a draw between Tarver and Kayode but it was Tarver who came on strong in the 2nd half of the fight, after losing many of the early rounds, to make the bout a draw.

It can never be a fully known fact that the drug produced that kind of specific performance from Tarver; however drostanolone is a popular drug amongst athletes that compete in weight classes. In my research I’ve found that this drug gives athletes the ability to gain harden muscle without the fear of gaining muscle mass (similar to the better known drug Winstrol). This drug can promote strength while simultaneously keeping body-fat the same or even decreasing it all together. It has become a popular diuretic amongst competition bodybuilders.

While many boxing websites are reporting that Tarver is suspended and has been fined $2,500, the CSAC told thaboxingvoice.com that its actions aren’t yet official. While protocol suggests that they fine and suspend Tarver it cannot be fully determined until Tarver chooses whether or not to exercise his right to have his “B” sample tested, which he said he will do. The CSAC’s representative said that the fine can be $2,500 and the suspension can range from 6 months to 1 year.

Tarver was slated to be a commentator on Saturday’s Showtime Championship Boxing card featuring Victor Ortiz and Josesito Lopez; however Showtime has elected to relieve Tarver of his duties for the night. Showtime is calling the decision mutual between Tarver and themselves.

Ironically enough, Saturday’s card was originally supposed to be Ortiz against Andre Berto in the much anticipated rematch of their April 2011 bout. However, Lopez became the replacement after Berto tested positive for the steroid norandrosterone. Along with Lamont Peterson, that makes 3 high profile fighters in the span of two months to have a drug test come back positive for a PED.

It makes you wonder what fighter will be next and how much further will this go? It’s a slippery slope and I feel that boxing can’t afford to have this kind of cloud hanging over its head; especially when you consider the many other issues plaguing the sport (horrendous scorecards, sanctioning bodies and promotional wars to name a few). Until now, boxing as a sport has never had the kind of problems associated to PEDs like that of baseball or even football; sure boxing has had some high profiled athletes test positive in the past, but not in the epidemic-like manner we’ve been experiencing more recently.

This is getting too scary to gamble on and the time for cockeyed optimism is over, so much so that we can’t allow VADA style drug testing to be an option. Boxing must plug up the hole quickly and decisively, otherwise it’s lost on the effort entirely. The days of using drug testing as a power play in negotiations are over; no longer can boxing’s most popular fighter, Manny Pacquiao, elude the rigorousness of advanced drug testing with trivial excuses. If we start at the top the rest will ensue, but everyone has to do their part. Too many injustices have transpired and if certain fighters can only be elite or clean then we must start to eliminate those fighters whose “special” features can only be found in a syringe.

I don’t care if you forget the Alamo, but Chavez Jr. should remember to piss in a cup when he fights in Texas (or anywhere else for that matter). On thaboxingvoice’s radio show last Thursday Lou Dibella said it’s likely that no special drug testing protocol will be used in the Martinez-Chavez Jr. fight, which is a travesty. “If it were up to me I’d like to have Olympic testing, if it were up to me I’d like to have VADA testing, the truth of the matter is [Chavez Jr.] isn’t going to agree to that. It’ll be Nevada drug testing and I’m not accusing anybody of anything, but Chavez (Jr.) is one huge middleweight” said Dibella (remember you can archive the show). I don’t blame Lou, I blame boxing for its indiscretions and it shouldn’t even be a situation that allows blame to fall on any one person. Boxing should hold itself responsible for making sure that fights of any magnitude (but especially high profiled ones) go without erroneous actions. Fans should unite to make sure that if and when we tune in September 15th to see Martinez-Chavez Jr. that we are given the benefit of the doubt in knowing both fighters are clean, otherwise why tune in at all. Boxing, on the other hand, should unite to take the testing protocol out of the negotiations and into the mandated fibers of each and every bout.