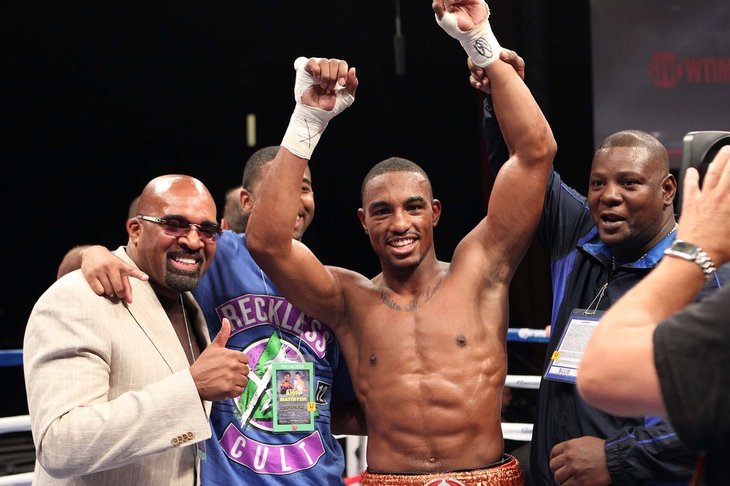 J’Leon Love. To some, it brings nothing to mind aside from the fact that it’s one of the best names in the sport. To the familiar boxing fans however, the name represents something much more. As a blue-chip prospect in the sport, J’Leon Love is steadily proving that he is worthy of the hype surrounding his young career. After an amazing amateur career in which he went 115-5, Love is hoping that kind of success carries over into his professional career.

Since turning professional in 2010, Love has started to already establish an unbeaten streak, going 14-0 with 8 knockouts. Although his unblemished record suggests otherwise, Love’s continuing journey from highly touted prospect to future champion has been anything but easy. A prime example of these rough matches could be found within his last two fights.

On September 9, 2012, Love was set to face Ramon Valenzuela Jr. (7-2-1, 1 knockout) in a bout that many thought would effectively gauge Love’s potential as a prospect. Instead, fans were treated to one of the dirtiest matches in recent memory as Valenzuela landed constant low-blows in an effort to lessen the points gap that Love had already established (By the eighth round, all three judges had it scored 70-62 in Love’s favor.). For Love, the patience paid off as Valenzuela’s testicular assault would go on to lead to a much over-due disqualification in the eighth round. Although it wasn’t the win he imagined, Love maintained a constant professionalism which is rare amongst young fighters, thus further increasing his stock in fans’ eyes.

This kind of professionalism carried into his most recent fight, as he faced Tyrone Selders (8-4, 6 knockouts) on Nov. 3rd. Selders would go on to take the fight with Love in about a week’s notice. This lead many to dismiss the fight as they believed Selders would be able to provide sense of real opposition against the young up-and-comer. As the fight began, it became quickly apparent that Selders wasn’t the type to just lie down. This kind of approach would go on to surprise most, but not all. “I’ve seen him fight before.” said Love, “He’s always been tough, and is always a game fighter. So I was expecting for him to be a tough fighter; the kind of fight who won’t lie down so easily, and to put forth the effort he put forth.”

The fight would go on for six of its eight rounds, with Selders landing the occasional good shot, but Love winning the individual rounds. As the fight came closer to its eventual stoppage in the sixth round, Love began to look increasingly confident as he began to visibly frustrate Selders. It’s this kind of confidence in his skills that has led to Love becoming a stylistic nightmare and unsolvable puzzle to all fourteen of his opponents. “I’m versatile, not one-dimensional. I can box if I have to, and I could bang if I have to. I can punch, and just in my ringmanship you can tell that I’m intelligent. My defense is good, and my offense is good, so with me being a full fighter I’m bound to give anyone trouble.”

It’s these kinds of victories that are making Love’s work with the Mayweather camp all the more worth it. “I feel it is what is making me into the fighter that I am today.” Working with the Mayweather camp does seem to come with added pressure however, as those in the media can’t seem to help but compare fighters like Love to the welterweight kingpin. This kind of comparison was available in Love’s last fight as commentators would often comment on how “Mayweather-like” his defense seemed at times. “I mean, Mayweather is a great fighter. He’s one of the best to ever lace up the gloves, and don’t get me wrong, it’s a great feeling when someone says, “Hey, the kids got good defense like Mayweather”, or whatever the case may be. It’s a great feeling, but I want people to know me for being J’Leon.”

Just like Mayweather however, J’Leon seems to be poised for greatness as he aims to continue chewing through fighters on his journey to a future number-one contender bout and eventual title shot. All things may just fall in place for the young fighter as he finds himself in trusted hands. As a fighter who is a part of the Mayweather Promotions stable of boxers, Love has manager/advisor Al Haymon, as well as Leonard Ellerbe and even Mayweather at his disposal when it comes to plotting out his career. With Haymon having the power to put any up-and-comer on a major network’s card, all signs point to Love getting matched-up with a contender sooner rather than later.

One thing that sets Love apart from even long established pros is the fact that he seems content with not rushing things and allowing everything as far as his career goes to play out. Some may think that this is Love’s patience is due to him being fairly unmotivated, but he proved it to be otherwise as he has shown to be outspoken in his desire to fight one of the sports bigger names. “There are so many great fighters in my division, and being that there are so many, I just want to come out and be able to make a statement for whoever, and let them know that I’m right behind them. I want to show that J’Leon is a force to be reckoned with in the middleweight division. I’m coming full blast for whoever because right now, that’s what you have to do.”

Luckily for fans, Love’s seemingly year-round activity suggests he may be able to get one more fight in before the year’s end. “I talk to my team, Al Haymon, Leonard Ellerbe, and Mayweather, and we want to try and squeeze one more in before the end of the year. So in December we’ll be right back to work since we never slow down for nothing. December is not set yet since we have no opponent or place, but we’re just trying to squeeze one in before the end of the year. I’ve been very busy in 2012, and I think 2013 is going to be a huge year for me.”

J’Leon Love is quickly proving to be a fighter worth watching as he advances through the ranks of his young pro career, and he has shown no signs of slowing. Even if you aren’t sure of his potential yet, J’Leon is set to make sure everyone loves him. “I train and work hard day in, day out, and I’m going to continue to get better. My skills are coming in and coming fast, so you better be on the lookout soon.”

-For any boxing news and updates be sure to follow Tha’ Boxing Voice on  twitter ( @thaboxingvoice ), as well as following J’Leon Love ( @2012JLove ) as he continues on his path towards middleweight supremacy. And for more interviews, boxing updates, and general conversation be sure to follow me @dfgonzalez305