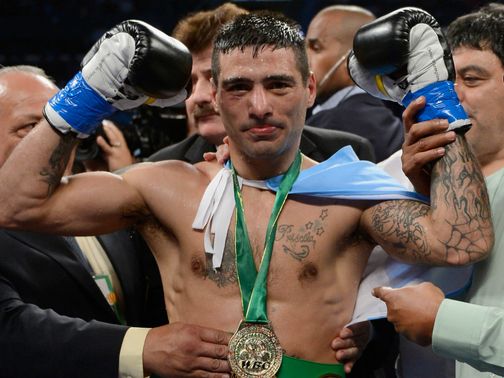 You can add another victim to Lucas Matthysse’s ever growing list of KO casualties, this time in the form of Mike Dallas Jr. The fight was the main event of Showtime Championship Boxing’s 2013 premier on a card that was televised live from The Joint Hard Rock Hotel and Casino in Las Vegas, Nevada.

The bout didn’t start without a bit of controversy first as Virgil Hunter, trainer of Dallas Jr., witnessed a member of Matthysse’s team give him 2 capsules — which were supposedly Amino Acids — to digest. It was deemed that no foul had occurred on the part of Matthysse and the bout was ready to proceed following the Nevada State Athletic Commission’s investigation.

The fight started out with a smooth tempo initiated by Dallas Jr. and he seemed to be faring better than the betting odds would’ve suggested. However, that wouldn’t last long and in the final minute of action Matthysse landed an enormous right-hand to the ear/temple region of Dallas Jr. Matthysse followed with a couple punches for good measure — none of which landed clean — but it was wasted effort as Dallas Jr. was already out on his feet. Dallas Jr. hit the canvas face first and once referee Robert Byrd observed Dallas’ lifeless body he waved off the fight.

With the win Matthysse (33-2, 31 KOs) moves one step closer to his dream fight in junior welterweight champion Danny Garcia, who is scheduled to meet Zab Judah on February 9th in Judah’s hometown of Brooklyn, New York.

In the post-fight interview Matthysse called out Garcia and made it clear that he’d love to fight him should he prevail. Matthysse did say that Judah stands a good chance of winning the fight against Garcia; Judah later posted a comment on Twitter regarding his intent to rematch Matthysse once he defeats Garcia.

In the co-feature, Jesus Soto Karass defeated Selcuk Aydin by a majority decision through 10 rounds. Soto Karass was the bigger man in the ring and was able to walk through Aydin’s big punches. The fight was fairly entertaining with both men trading throughout the contest. Although Aydin found success in certain rounds he couldn’t hurt Soto Karass, who was using a solid body attack to setup his upstairs work. The judges’ scorecards read: 97-93, 97-93, and 95-95.