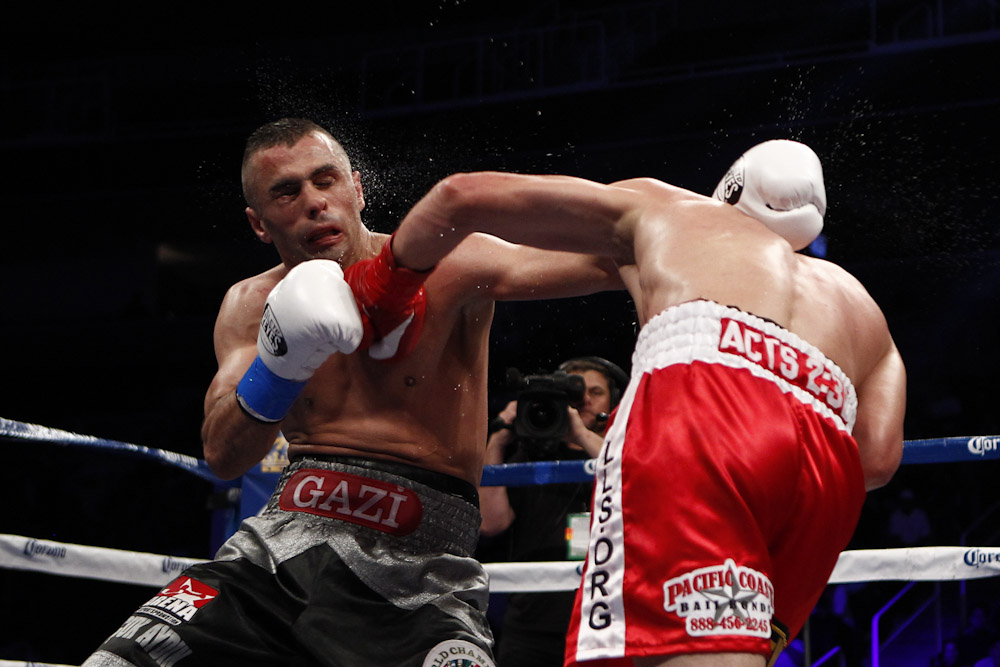 What a night of boxing In San Jose, California.  Every fight was good to watch with very few dull moments.

In the main event, the mood was in the air for war as Selcuk Aydin came in to the ring with loud boos from the pretty good crowd of 6,267 people. Quite the contrary, as they cheered on the hometown hero, Robert Guerrero.

The fight lived to its expectations being a hard fought unanimous decision victory for the ghost, who at times got hit right in the chin by really hard shots from Aydin who fought in spurts with power shots.

Guerrero who was moving up two weight classes from lightweight to welterweight and looked good in the opening rounds. He was boxing, moving, and shooting combinations. With all the activity, it wasn’t seemingly hurting Aydin who kept pressing the action.

Aydin did his best Antonio Margarito impersonation by taking Guerrero’s best and moving forward to land his big right hand. The Turkish fighter picked up steam in the middle rounds and later rounds while Guerrero seemed like he was slowing down. Maybe it was the jump up in weight or his inactivity, but Guerrero was visibly tired.

However the multi division champ fought on, boxed, and scored often in the later rounds also taking Aydin’s best shots. The outcome was a good fight and a good win for “The Ghost”.

Aydin fought with desired but he just didn’t fight complete and his big right hand couldn’t take Guerrero out of there.  Aydin says that if they had fought 3 years ago he would have knocked Guerrero out but he also praised the hometown hero by saying that he had really good power, speed, and that he could withstand all of his punches.

Guerrero wins the WBC interim welterweight title, so that makes him the mandatory for Floyd Mayweather, Jr. He didn’t wait a long while to call out the pound for pound king in the ring during his post-fight celebration. He said Mayweather should come get the belt, but if one thing we know about Floyd, is he cares more about the dollars than the belts. Should Guerrero make a name for himself in the division with top 10 guys and impress, maybe he can get that fight down the road. The co-main event feature was a 10 round fight for the vacant NABO welterweight title. It was Shawn Porter from Akron,Ohio against Alfonso Gomez from Guadalajara, Mexico. It turn out to be a really good scrap.  Porter’s skills were just too much, as he edged Gomez by Unanimous decision.

Early on you could tell speed-wise Porter was the better man. However, with some of  his deficiencies on display, mainly his defense and his inside fighting game, it allowed Gomez to get back in the fight. But thereafter, Porter took control of the fight, landing when he wanted to and at will.

Porter was cut in the first round by a clash of heads, then again in the 9th, leaving a major gash that probably should have caused the fight to be stopped, but the ref let the bout continue. That didn’t affect Porter as he keep firing away power shots in the last two rounds getting a decision in a good fight.

Porter is exciting and young, however that cut may keep him out for a period of time. Let’s hope we see him back on the ring against a Keith Thurman or a Kell Brook or someone on that level in the near future at 147.