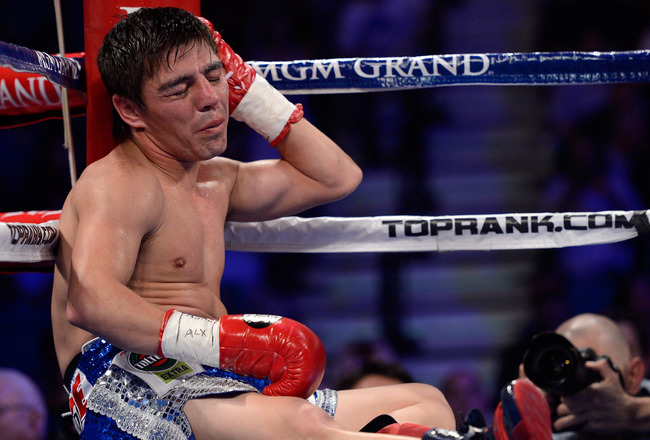 In what looked to be an all action bout from the opening bell. Jesus Rojas was sent to the canvas early in the round but only to come off the floor to take control of the first round, landing numerous left hooks to the face of the more experienced Arce. The first round produced some good back and forth action with fans anticipating the remainder of the fight and what fireworks could have been in store for those of us watching live on television or at the MGM.

What was next to come no one could have fathomed and here’s where it got odd. Rojas charged in at the sound of the bell, he swung, landing a left to the body. Arce kind of pulling on the back of the head and neck; almost like a headlock look is what would best describe it. So the blow that landed was clearly low but instead of Arce showing emotion of pain coming from abdominal area he was holding his mouth until Rojas landed another shot to the body back area. Arce fell into the ropes from this position leaving himself vulnerable to another left hook to the head/ear area of Arce face which is when Arce fully went down.

There was a no decision in the featherweight match between Jorge Arce and Jesus Rojas after Rojas landed a low blow and a head butt (that I really didn’t see) and then hit Arce behind the ear in the second round. The fight was called a no decision.

Now we all know Jorge Arce and his fan friendly style and a warrior’s mentality. Should we question whether he could of continued the fight? Jesus Rojas did he questioned Arce heart telling Arce, “He’s coward I trained very hard for this fight and clearly he didn’t.”

At Jorge Arce post fight interview Arce said, “This can not stay like this we must have a immediate rematch.”

My closing thoughts are if a rematch takes place that I doubt since there are bigger fights for Arce, I employ everyone to tune in because I’m sure this fight will pick up right were it left off.