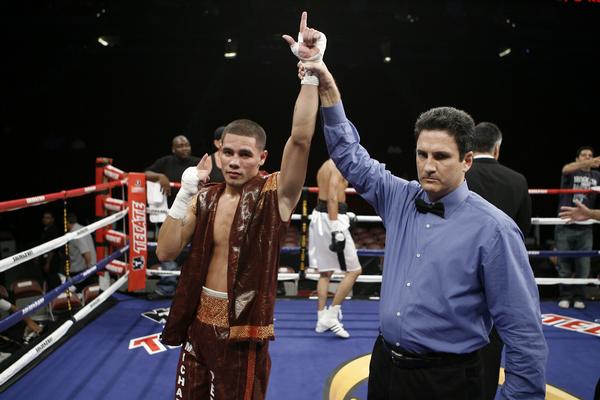 Throughout history, the name Michael Angelo has come to signify different things for different people. For some, the name represents a 15-16th century artist (spelled: Michelangelo) whose lasting legacy was left through his art. To others, it brings up memories of a crime-fighting turtle (also spelled Michelangelo) with an insatiable love for pizza. This name may come to represent more than just classic art and a cheesy cartoon sooner than you think. If all things go as planned, it may come to represent the next great force to emerge in boxing.

Nicknamed “The Artist”, Michael Angelo Perez is quickly making rounds as one of the next great contenders in an already stacked lightweight division. At 17-1-1, 10 knockouts, Perez has faced some of the toughest competition available, whereas as other up-and-comers tend to take lower-level fights to build up their confidence and their record. Just like the artists of previous generations, Perez is always looking to improve on his last performance whether it be through mental or physical means. This can be seen throughout his record as it is littered with relatively big names, which makes this young fighter even more impressive.

This weekend, Perez finds himself matched-up against Fernando Carcamo (10-4, 7 knockouts) in a bout that takes place on the undercard of Miguel Cotto vs. Austin Trout. Although Carcamo is still relatively unproven as a fighter, he still poses as a potential threat for the heavily favored Perez. Just the looming threat of an upset is enough to get Perez to focus and take training especially serious for this Saturday’s fight in Madison Square Garden.

“I always go into fights ready and in condition. Our game plan is to put the pressure on him, and match him up. Hopefully, that’ll be the key to defeating Fernando Carcamo at the end of the day. I’m ready for whatever he brings to our fight. [With] Every fight and each step of the way, I’m learning; and I’m still young so I’m going into each and every fight with the goal of becoming a better fighter as I’m moving forward from that [sole] defeat that I had. I’m just learning. I’m young, and I still got a long way to go.”

With many young fighters, the expectation is that they often tend to choke on the sports’ biggest stage since they can’t really prepare for the overwhelming pressure and energy that comes with a big fight atmosphere. On Saturday, Madison Square Garden is said to be close to sold-out. On top of the energy from the live-crowd, both fighters have to contend with the fact that even more eyes will be on them by way of a massive television audience.

“No pressure at all. It’s not my first big undercard. I’ve fought in a few major undercards, one of them being Floyd Mayweather vs. [Juan Manuel] Marquez. I’ve been in that atmosphere already so I know how it feels. Only difference is that I’m a more mature fighter. I mean, I’m turning 23 this year, yet I’m still learning from this game since I’m still young, but no, I don’t feel any type of pressure. If anything I just feel a little relief that I’m fighting at home so that people on the east-coast can finally come out and see me, instead of me always fighting in the west-coast or somewhere away. It’s a blessing to fight at home.”

Although some may not recall seeing Perez on the undercard of Mayweather vs. Marquez, many are able to recognize him from his absolute war against fellow up-and-comer Omar Figueroa (19-0-1, 15 knockouts). In a fight that featured slick boxing, as well as a constant back-and-forth, Perez was seen to collapse in the sixth-round, leading the referee to stop the fight and award the victory to Figueroa. Unlike many young fighters who place a heavy emphasis on their glossy undefeated records, Perez has been able to effectively recover and continue making progress as he ascends the lightweight rankings.

“It (the Figueroa loss) opened my eyes to a lot of things. It made me change a lot of things when it comes down to my training, and even to the people I keep around me. It just changed me completely, and made me do a complete 360. From that fight, I matured a lot and was able to learn a lot. I think it helped make me a better fighter today then I was back when I was undefeated. It made me realize that I needed new strength training, so I got a new strength trainer; a nutritionist, because I wasn’t eating right and wasn’t taking in the proper vitamins and nutrition that I really needed for my body; I wasn’t doing a lot of things that I should have been doing, and because of that loss I’m finally doing them. I think that was just God sending a message for me to wake up and open my eyes so that I can finally see. I’m just glad I had that loss. I’m more mature since that loss, and I keep growing and maturing with every fight that passes.”

As thankful as Perez may have been for finally getting the experience of his first loss over with, he is still looking to avenge that loss in an inevitable rematch that may occur down the road.

“We’re managed by the same promotional company (Golden Boy Promotions), so the fight isn’t too farfetched. It can happen again, and I believe it will happen again. Deep down in my heart, I don’t believe that he’s (Figueroa) the better fighter, it was for that night, and he was the better fighter. He stepped into the ring more mature than I was. A lot of thing went wrong in that fight that people don’t understand. I didn’t rehydrate right, and I didn’t do a lot of things that I’m doing now, so it’s paid off now. I don’t see him beating me when I’m at 100%. The night of that fight, I was less than 40%. I usually rehydrate up to at least 150 lbs. from [the cut to] 135 lbs, and on that night I rehydrated up to [only] 141 lbs. That’s 9 lbs. that I didn’t rehydrate, and it made a difference in that fight. I collapsed in the corner during the sixth-round, and people don’t understand why the fight was stopped, saying, “oh, he gave up”, but I’m able to live to fight another day, and I’m just glad it happened to me. I now have my eyes open, and I’m blessed.”

With that Figueroa loss still fresh in many people’s minds, Perez is going to have to put on an especially great performance against Carcamo come Saturday night. With another dominant win under his belt, Perez could finally set himself apart from the rest of the division and challenge one of the elite.

“What a lot of people already know about me is the fact that I never back down from any fight. Whatever name Golden Boy [Promotions] give me, I never back down and always say yes. I never make them look for alternate opponents. I believe, as I was coming up in my career, that I’ve fought more tough opponents than any other prospect that coming up now, and I can’t help but feel as though that’s what’s gonna help me in the long run because I’m gonna be ready for those tough fights. I’m gonna be more prepared, more mature, and at the end of the day I will fight anybody. Just put the right money on the table, and we’ll make it happen. I’ll fight anybody from [Antonio] Demarco (28-3-1, 21 knockouts), to [Adrien] Broner (25-0, 21 knockouts), to anybody else. It really doesn’t matter to me. Just give me a date, and I’m getting ready for the fight. We’re just two men with two hands and two feet, so we’ll see who the better man is at the end of the night.

With a game attitude, and a style to match, Perez is poised to end 2012 in spectacular fashion. If everything goes according to his plan, don’t be surprised if you see him challenging for a world title in the very near future.

“I was in talks to fight November 24th on the same night [Andre] Berto (28-2, 22 knockouts) fought, over in California. They called me to fight Richard Abril (17-3-1, 8 knockouts) for the world title after Sharif Bogere (23-0, 15 knockouts) had to drop out. That just shows that I’m in the air already, and people are starting to notice me enough to be willing to call me for an opportunity like that. In the end, the fight fell through because something happened with HBO that they didn’t accept the fight, or something like that, but at least my name is in the air for people to finally start to recognize me now. So I would say by 2013….that would be my year to get that title shot. Maybe I’ll get two more fights before, but I should be ready for that title fight.”

Before looking forward to 2013, Perez already has his hands full with Fernando Carcamo. Should he get past him in a dominant, and maybe even a spectacular way, expect Perez to become a “must watch” type of fighter. Who knows what the future holds for “The Artist”, but with a constantly improving game you can expect that he’ll be unleashing his masterpiece soon.