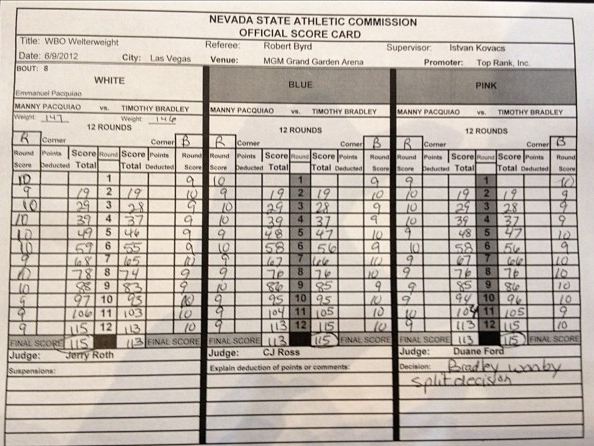 There’s nothing worse for a fighter to put in a eight week training camp while making the sacrifices of being away from his kids, his wife, and the place he calls home for some time all to have it stolen by 3 men he has never met. This has become the norm in boxing this past year.  There has been several bad decisions this year.

We have seen none bigger than Manny Pacquiao vs Timothy Bradley on June 9th, where three judges took away a clear win from one of the sport’s biggest stars. Top Nevada judges Duane Ford and CJ Ross had it 115-113 in favor of Bradley which was a joke. Most ringside media had it 9 rounds to 3 for Manny.  If Pacquiao exercises his rematch clause, Bradley will get another payday. Even if he doesn’t, Bradley’s name received press because of this decision in the main stream media. Because he’s still a Top Rank fighter, he’ll probably get a big money fight either way. While Manny will be able to recover from this “loss” because he is such a superstar, there are some that won’t.

Another bad decision occurred this year in the same city of Las Vegas with Brandon Rios vs Richard Abril This fight was suppose to be a showcase for Rios. It was anything but that. Rios was given a boxing lesson by a 9-1 underdog in Abril. It happened again with the Three Blind Mice. Bad judging took it away again, this time with veteran judges Jerry Roth and little known Glenn Trowbridge. That night most people ring side had a clear Abril victory. While Rios can recover because of his reputation as an action fighter and his big time promoter Top Rank behind him, where does that leave Abril?

In February of this year, a fight between Tavoris Cloud and Gabriel Campillo became another edge to the sword. In a fight where Cloud was seemingly going to bull rush Campillo out of there with his two knockdowns of Campillo early, the Spaniard adapted and clearly out box Cloud. However when the scorecards were read, Cloud had won a split decision winning over two of the three judges scorecard. In doing so, Campillo was robbed of a world title and had to get back in line. Cloud however, has a big money fight with Jean Pascal this August.

So the questions I pose to the public is why hasn’t  the Nevada Or Texas commission held these judges responsible for stealing a fighter’s hard earn victory? Last year, at a fight I attended between Paul William against Erislandy Lara, a similar case of the Three Blind Mice occurred. Lara was soundly beating Paul Williams, but at the end of the night Paul Williams was giving a victory that most people in attendance didn’t feel he deserved, including me.  In this case the three judges assigned where suspended and sent back to school. Now their complaining about finding work serves them right!

There is no solution for human error but when it happens, those involved need to be held accountable. What solutions can the boxing public come up with? Lou Dibella on ThaBoxingVoice Radio show dismissed the idea of having the judges in a separate location with monitors secluded from the crowd. He also dismissed the notion of having ex fighter, ex trainers, promoters, managers, or media being judges. Dibella stated, “These judges are trained professionals but when the promoters are in charge of accomidations for the judges, it doesn’t make sense. When certain judges have certain relationships with different sanctioning bodies, it doesn’t make sense. Right now I’d be more comfortable having a group of 5thgraders judging fights, then at the end picking the winner by having them raise their hands for the winner.”

Lou Dibella and Jim Lampley want the fans to Occupy Boxing but it’s only so much the fans can do without being betrayed by the judges. Maybe it serves us better to have an open scoring system? Or maybe by having some judges being brought in for better training, because whatever is going on is not working in fights. This is fighters’ lively hoods. Some guys might never get on a big stage again, so let’s not have it taken away by three blind judges that let their sacrifices go for not.