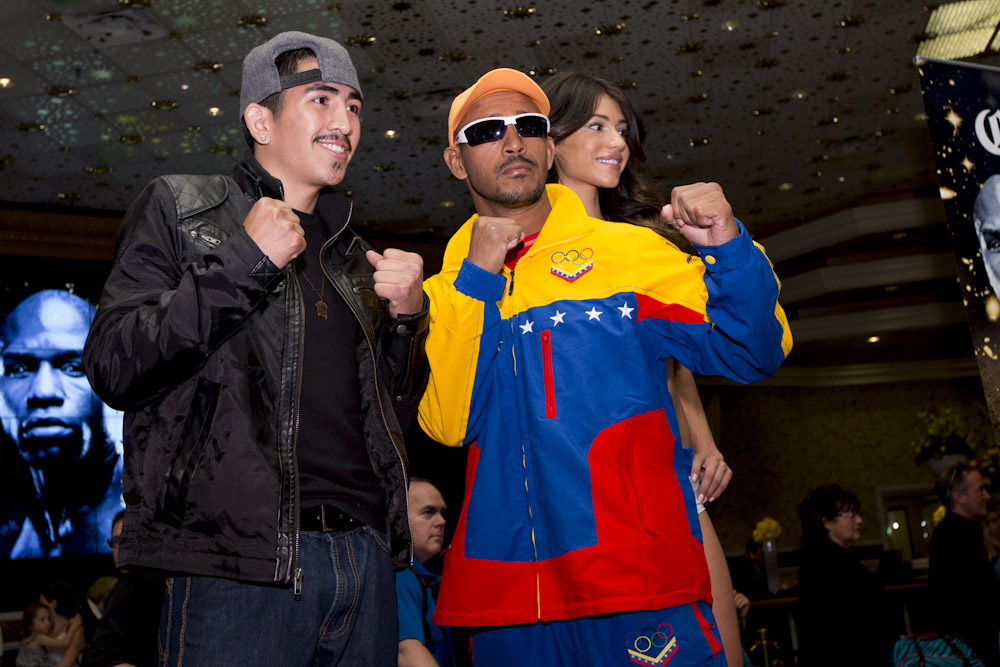 Tomorrow the “MayDay” card won’t just be 1 or 2 headline type of fights. It will feature 4 fights that all can arguably headline a normal Showtime event. While most people will be interested in the 2 championship bouts, there are 2 other fights that are sure to keep you interested. One of the top guys at light middleweight, Gabriel Rosado, will have his 2nd fight at middleweight as he will be facing 1 of the people currently with Mayweather Promotions, J’Leon Love. Also 1 of the young talents of the sport, Leo Santa Cruz will square off against heavy hitting veteran Alexander Munoz.

The Philadelphia native, Gabriel Rosado, comes in with a record of 21-6 with 13 KOs, but his record doesn’t indicate the process he has made in the last 2 years. In 2011, he was a little known fighter that was probably most known for getting stopped by Angulo and losing to Derek Ennis. Then he came back to Philly, started stopping his opponents, impressively against Soto Karass. As each fight went along, you could see the improvement to the point where people wanted him to get a shot at Canelo Alvarez. That didn’t work out, but Rosado gained the respect of the boxing community for his toughness and for the people who didn’t yet, he sure convinced them by taking the Gennady Golovkin fight, a fighter who seems to be avoided by everyone currently.

On the other side of the ring will be the young 25 year old who resides from Michigan, J’Leon Love. Even though Love hasn’t faced an opponent to the level of skill that Rosado has, he is the naturally heavier guy, as he was fighting at 168 6 months ago. Love comes into this fight with an undefeated record of 15-0 with 8 KOs. I thought he should have been able to finish his last opponent, Derrick Findley in his last fight, which went the full 10 rounds, but it was his highest level opponent thus far. This is a big step up for him and he knows this is his chance to shine on the biggest stage in boxing today, a Floyd Mayweather card.

Leo Santa Cruz (23-0-1 with 13 KOs) is 1 of the upcoming possible future stars of the sport. He’s only 24 years old, he is exciting to watch, and he is Mexican. The combination of those 3 things instantly put you in contention to be a future star. He throws about 100 punches per round and he has shown any endurance issues thus far. However, this will be his 1st fight at junior featherweight. His last fight, which was featured on CBS, wasn’t as impressive as some people would have wanted, but he now has chance to put on a true show in front of a huge crowd and show why the kid they call “Teremoto” will be on PPVs for years to come.

Santa Cruz’s opponent will be the 34 year old veteran from Venezuela, Alexander Munoz. The heavy hitter comes into this fight with a record of 36-4 with 28 KOs. He’s a 15 year veteran of the sport and has been a champion in the super flyweight division. His last 5 fights have been in the junior featherweight division and he’s went 4-1, but none of the wins were against anyone good and the 1 time there was a step up in competition, against Kiki Kameda, he lost either 8 rounds to 4 or 9 rounds to 3 depending on who you talk to. He could be in for a long night against a very high volume puncher in Santa Cruz.

My predictions for these fights are Rosado winning by TKO in the 8th round. I think his good footwork will be his biggest advantage. I still think he is best suited at 154 lbs, but he is good enough to be some of the 160 lb guys out there, but it will be a good fight. I’m also going with Santa Cruz by TKO, but not as early as most people will think.

Cruz isn’t a big power punch to me, he really goes to work with his punches, both to the head and body, but when he stops someone, it’s not off 1 punch, it’s off cumulative damage. He’ll win this impressively, but it will be over about 6 or 7 rounds, not 3 or 4. All in all we should have 4 very good fights on the card tomorrow. Whether you order it on PPV or watch it at a bar or someone’s house, it’s definitely an event you can’t miss, enjoy the fights.