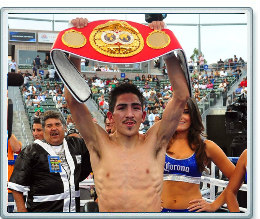 Mexican bantamweight Leo Santa Cruz will be making his 2nd title defense on Saturday against fellow Mexican countrymen Victor Zaleta. The fight will be part of the Showtime broadcast which features a main event between WBC junior featherweight titlist Abner Mares and Anselmo Moreno.

With his high volume punching, Santa Cruz has created a reputation for being an action fighter ever since his Showtime Extreme performance against Vusi Malinga — Santa Cruz picked up a vacant IBF belt in the fight. That performance earned Santa Cruz a spot on the Canelo-Lopez undercard 3 months later where he successfully defended his IBF belt against veteran Eric Morel on the opening bout of the Showtime broadcast.

This will be Cruz’s 3rd fight in 6 months and he is staying focused on the task at hand, never losing his drive to maintain a solid work ethic. He will look to add to his 12 KOs by maintaining the solid body attack that is becoming a signature of his.

“I’ve been sparring and training really hard. I worked really hard with my strength and conditioning. I don’t know much about Victor Zaleta, it looks like he has a good style and he comes forward and he pressures and doesn’t back down; those are the fighters I like to fight because if they run it makes it a harder fight. His style is perfect for me and I think we will go to the body and break him down and stop him,” Santa Cruz told Thaboxingvoice.com.

With Cruz’s sudden and dynamic burst onto the scene, and because he’s made lasting impressions, it can be difficult to keep into perspective his competition from fight to fight. There are some fans that feel his level of competition isn’t correlating to his abilities, but the process hasn’t been as gradual as one might assume and his opponents are reasonable for the suddenness of his upsurge.

“I do the training and my promoters and managers are the ones that get me the fighters. I tell them ‘I’ll fight anybody you guys put in front of me’ and I don’t tell them to get me anyone, I just fight whoever they pick.”

In all fairness, with Moreno moving up the opposition is somewhat limited in terms of “big” fights. There are some meaningful fights in the division with guys like Joseph Agbeko or Vic Darchinyan, but the money fights are in the division 4lbs up at junior featherweight.

It’s logical to think that with the growing popularity of Santa Cruz, it’s only a matter of time before his popularity draws parallel to the magnitude of fights presented by 122lbs. Cruz obviously feels the same and says his days at 118 are numbered, alluding to the fact that 2013 could be his debut at 122.

“I think this will be my last fight at [118lbs], if not then after this [Zaleta fight] maybe one more. I do want to go up to 122lbs so I can fight Mares, Moreno or Nonito and all the good fighters. I do want to fight the best, but I’m waiting for the right moment.”

That moment could be on the horizon and directly related to Saturday’s main event in Mares-Moreno. With Donaire and Rigondeaux unlikely to square off with the winner anytime soon, Santa Cruz could be on that list for an eventual showdown with the winner of Mares-Moreno. Needless to say, Cruz will be keeping a close eye on that fight and its outcome.

“I’ll be paying attention because in the future Mares or Moreno could be my opponent. I’ll be studying them to see what they do wrong so in the future I know how to fight them,” Santa Cruz said.

Although Cruz has no preference in a potential matchup with either fighter, he is predicting a Mares victory come Saturday.

“If [Mares] pressures and does what he has to do he’ll take it. I think it’ll be a close fight, but I’m picking Mares.”

Saturday is a big night for boxing fans and the Mares-Moreno fight is one of the most anticipated matchups left in the remainder of 2012. However, don’t sleep on Leo Santa Cruz. This guy has some unique skills that make for interesting TV and even though the “styles make fights” adage is true, Cruz has the ability to remain must-see TV no matter who is standing opposite of him.

For Full Audio of This Interview click here: http://www.blogtalkradio.com/thaboxingvoiceradioshow/2012/10/25/leo-santa-cruz-and-special-guest-join-us