Danny Garcia started 2012 as what most would call a young, good, basic fighter that was hungry for a world title shot. After beating former world champions Kendall Holt and Nate Campbell in 2011, he finally got his shot against Mexican legend Erik Morales, for the WBC 140 lb title. Morales had since won the belt after beating Pablo Cesar Cano before nearly defeating Marcos Maidana with one eye in 2011, a fight most thought he would get badly injured.

Morales, who came in overweight, had to vacate the title. But this fight in March of this year was the coming out party for the young Philly native, Garcia. Garcia won a hard battled decision to beat Morales to win his 1st world title. It was a learning experience for Garcia to face such a seasoned fighter who even past his prime gave Garcia problems and touched up the face of Garcia. However, Garcia proved his mettle by knocking down Morales in the 11th and winning the title on the scorecards in Texas. What was probably most remembered was the post fight interview with Max Kellerman. In that interview, Garcia cried tears of joy with his dad and trainer, Angel Garcia.

Garcia was a substitute for Lamont Peterson in his rematch with Amir Khan in July of 2012. The fight was famous for the Angel Garcia quote, “I never met a Pakistani who could fight”, and Khan vowing to make Angel eat his words for his comments by promising a knockout against Garcia. In a fight where many expected Khan to win handedly before his move up to 147 and potential fight with Floyd Mayweather, Garcia changed that course with one devastating left hook.

Garcia was getting beat and out boxed by Khan in the first two rounds. While Garcia maintained his composure and landed some shots, Khan was clearly beating Garcia. Then it happened. In the 3rd round, while the two were exhanging punches, Garcia landed a massive left hook that sent Khan falling like a tree with no one yelling timber. To his credit Khan fought back to stay alive.

Khan survived the 3rd round but his legs were still not fully back yet. Garcia patient and with the killer eye stalked Khan knocking him down two more times in the 4th round before eventually having the referee, Kenny Bayless stop the fight. If Morales was his coming out party, the Khan victory was his I’m more than just a good basic fighter party, I’m a superstar party.

The Philly native has always felt he was the underdog and has seemingly had to come up the tough way in getting to where he is today. He told ThaBoxingVoice in our air that he was treated like an opponent so he had to beat down his opponents. His dad mentioned to us that while Khan was riding in limos to events, Team Garcia was in taxis.

That changed when Morales invoked his rematch clause in October of 2012. Garcia was now the a-side of the world title main event fight, opening a brand new arena in Brooklyn for the first title fight in 81 years. Garcia was set to make his first 7 figure payday in his career. He had made it. Only it almost didn’t happen when Morales tested positive for a banned substance. The way the tests were handled and made a secret was a farce (that’s another story in itself). But the fight went on.

This time, there was nothing the aging legend could do to stop Garcia. Garcia had said he showed Morales too much respect in the first fight. That showed in the second as Garcia came in attacking and knocking out Morales with the signature left hook spinning him like a helicopter. 2013 should be an interesting year for Garcia in a loaded 140 lb division. 2012 was his breakout year and he is ThaBoxingVoice.com’s breakout fighter of the year. 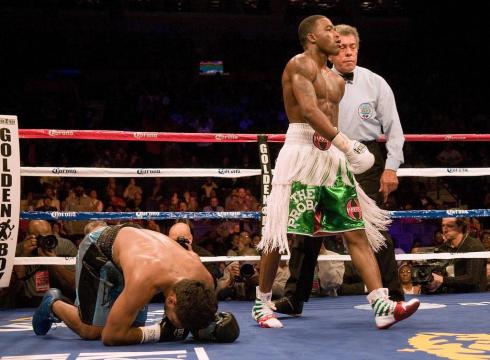 Adrien Broner: Broner went 3-0 in 2012 with 3 KO’s. He destroyed a top 10 junior lightweight in Eloy Perez. He took out overmatched Vicente Escobedo even if he did fail to make weight and had no care in the world to do so. Then, in November of 2012,  he moved up in weight as he aced what most felt was the number 1 lightweight in the world in Antonio Demarco. Broner’s charisma is just as high as his talent. He dances once his opponent hits the canvas and the fight is over. The famous ‘brush my hair’, as seen in his HBO fights this year is a reason you love him or hate him. Among other things, that split in his fans and detractors will be a reason why both sides of the fences watch him 2013.

Robert Guerrero: Guerrero moved up two weight classes this year, He beat two solid welterweights by winning a decision against both Selcuk Aydin and Andre Berto. The Guerrero-Berto fight is a candidate for 2012 fight of the year. With those two victories, Guerrero has put himself in a position to fight the number 1 boxer and money man in all of the sport, Floyd Mayweather in 2013.

Bryant Jennings: Jennings was a fixture of the NBC Sports Network this year. After the first show had its main event cancelled due to injury sustained by Eddie Chambers, in a bout where he was supposed to fight Sergei Liakovich; Jennings vs. Maurice Byarm was moved up to the main event.  In what was an entertaining heavyweight bout, Jennings defeated Byarm by decision. Jennings went on to fight 4 more times in 2012 going 5-0 with 3 KO’s. Jennings has received praise as being the best American heavyweight hopeful to win a world title and Freddie Roach flat out said he was the best American Heavyweight today. Some have even stated he reminds them of Evander Holyfield.