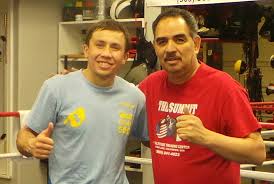 “[Golovkin] is 100 percent [for this fight]. We have four sparring partners in camp, the weight is in check, we went to the doctors last week and [Golovkin] weighed 165 lbs,” said Abel Sanchez head coach of boxing superstar Gennady Golovkin, who fights in Carson, CA on October 18th on HBO. Golovkin will face Marco Antonio Rubio in a bout labeled and promoted as “Mexican Style,” a play on Golovkin’s post fight speech after defeating Daniel Geale in which he coined his style “Mexican style.”

“We are certainly not going to take Rubio for granted. Rubio is an experienced guy, a lot of knockouts and decent power,” Sanchez said as he went on to explain that Golovkin may take time to feel out Rubio in the first round, but expects an action packed fight. “I see the fight being very explosive. I think Rubio is going to come to fight. I think his pride and the fact that [the event is named] “Mexican style” that the Mexican fans will be in attendance [as well as] the show is sold out already. I see it being a Mexican style war.”

In fact the event is in such high demand the StubHub Center opened up 300 additional seats after selling out the venue to provide for such a high demand for Golovkin’s California debut on major network television. “The demand for tickets has been great and we are happy for the support, but not just for Golovkin’s fight, but [also] a great undercard with Nonito [Donaire Jr.] fighting on the undercard makes it one of the better cards in a long, long time,” Sanchez explained. Sanchez also said that is also exciting that the fight will be in Southern California near Big Bear, CA. where they train and hopes that Golovkin can have more fights in the area as a whole.

This is also the first steps in getting the elusive big fight Golovkin has been in search of since the fall of 2012. Golovkin now has empirical data to show his drawing power and could show that not just does he create a compelling match up for most fighters at middleweight, he also is able to monetize the intrigue as well.  For Sanchez it is simple, “That excuse is getting old. In our last fight we fought an Austerilian in the Garden that really nobody had ever heard of other than the one fight he had over here against [Darren] Barker in Jersey, but not a known guy in the states and we still sold 8,500 tickets.” Sanchez said that excuse is no longer on the table, but the new option is for a fighter to just say, “I don’t want to fight him.”

As for the big fight as we head into 2015, Golovkin now looks to have two very real options, Miguel Cotto or recent HBO signee Saul “Canelo” Alvarez. “I think he understands and reads enough English to know what is going on, but Rubio is in front of us right now, but the fact that Canelo did sign [with HBO] does make it that much more attractive for the boxing fans. I am a fan just like you are we just want to see the good fights,” claimed Sanchez.

“[Golovkin] went to the doctor’s [office] a week ago, ten days ago, and we’re four weeks away from a fight and he is weighing 165 lbs, but that was before training. In the morning we drove at 6:30 got there at 8:30 he got on the scale and he weighed 165 lbs. He doesn’t have a problem making the weight. He doesn’t have a problem making 160 lbs. It would be a little bit of work making 154 lbs., but we could make it,” Sanchez explained. Golovkin has only been on the U.S. market for two years and Sanchez feels that HBO has done a great job, and he is fine fighting whoever they offer him and he knows that a big fight will come sooner rather than later