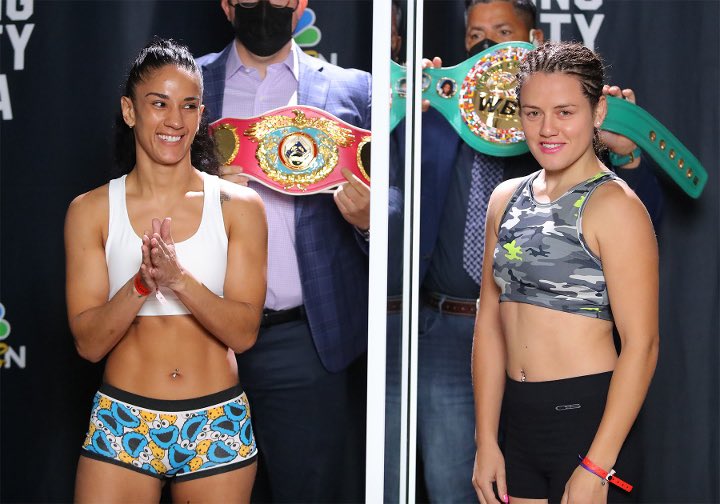 Amanda “The Real Deal” Serrano showed why she is one of the best fighters in the fight game by taking on and stopping Daniela Bermudez.   It was a battle of the number ones with Serrano being número uno at 126 lbs and Bermudez at 122 lbs.

The two began trading leather from the opening bell but the size, footwork, boxing skills, and accuracy of Serrano proved to be too much.

After the fight, Serrano welcomed all comers for future fights but the goal is to become undisputed.

Round 1: Both fighters came out swinging for the fences. Serrano controlled the pace of the round pressuring Bermudez, landing hard shots but Bermudez got her fair share in.

Round 2: Serrano pressured and countered effectively early on in the round. In the second half of the round, Bermudez started to come on and landed a beautiful left hook.

Round 3: Both fighters took the first minute of the round off. Serrano started things off and by the end of the round, the two were trading hard punches.

Round 4: Bermudez attempts to press forward more this round but many of her shots miss their target. At the end of the round, Bermudez gets caught by a hard left as she walks straight forward to cap off the round.

Round 5: Bermudez does well this round catching punches with her face. Serrano boxes well by using her jab and pot-shotting the Argentine fighter.

Round 6: Bermudez starts to show signs that she’s gone through the wringer. She gets caught with some shots but is able to land some of her own. Serrano lands a monstrou5body shot late in the round and Bermudez seems bothered by that shot.

Round 7: This round was one of the more competitive rounds of the fight. Both fighters landed tremendous shots in the exchanges which at this point could see a possible shift in the tide.

Round 8: Bermudez seems to have been replaced by a punching bag this round as Serrano is the busier, more accurate fighter. It’s starting to look bad for Bermudez and she needs a knockout by now.

Round 9: The bodywork of Serrano pays off this round as Bermudez gets taken out with a body shot. Bermudez had a delayed reaction from a two-punch combo and she took a knee and couldn’t get up.