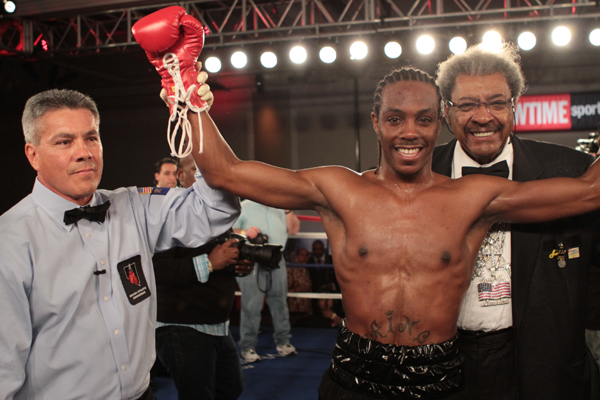 In the opening bout to the May 10th ESPN Boxing broadcast, a pair of junior welterweight prospects took center ring for an eight-round fight. Featuring American prospect, Amir Imam (13-0, 12 knockouts), fans are hoping to see if the knockout ratio is a result of true power and talent, or shallow opposition. Imam’s latest test is Cuban, Yordenis Ugas (15-2, 7 knockouts). Some viewed the initial match-up as a showcase, while others saw it as the first true test of Imam’s career. One thing all agreed on however was that this was a must-win if Imam wanted to become the next star in the sport.

The bout opened and ended in the same competitive manner. Amir Imam relied on a stiff and doubled-up jab to keep Yordenis Ugas away. Yordenis Ugas’ gameplan was simple but effective; get Imam along the ropes and batter him there.

It was a gameplan that succeeded early for the Cuban fighter, and Imam seemed rather outclassed early. It even led to some ring-side to question whether this was too much of a step-up for Imam.

Much to his credit, Imam kept his wits about him and stuck to his calculated gameplan. Things really began to turn around for Imam after round three as Ugas a growing fatigued. With Ugas’ punch output decreased, Imam responded with a series of counter-punches and right hooks to damage his opponent.

It was an approach that only grew more effective with each passing round, and by the end of the eighth it was clear that Imam had managed to dig himself out of the early points-deficit on the scorecards.

Amir Imam was awarded the competitive unanimous decision victory on scores of (79-73), (78-74), (78-74). Imam may not be a perfect fighter, but with this eight rounder he proved that he has the skills and heart necessary to take him to the next level.