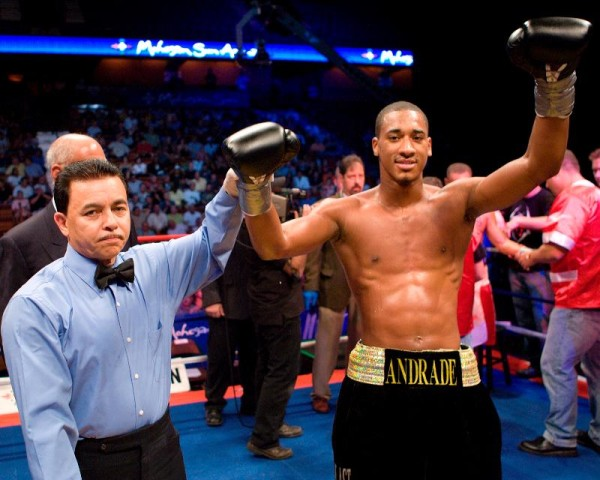 The newly crowned WBO junior middle weight champ Demetrius Andrade, looked great a little over a month ago in totally dominating Vanes Martirosyan, picking up a vacant title.  This young talented boxer is blessed with physical attributes that give him massive advantages in height and reach over most of his opponents. Interesting to hear him express his thoughts on Erislandy Lara and the possibility of facing him in the ring.

At the Barclays Center last Saturday night, he said of Lara; “He won, congratulations to him. If he wants to come my way, and really get that ass touched, he can come see me! Other than that, I am on to bigger and better.”  Smart kid and smart answer.  The way that his career has been managed thus far, tells me he is not fighting Lara anytime soon.

He went on to explain; “Right now I got to take care of my mandatory and keep on moving up and climbing up them ladders.”  He, like every other 154 lb fighter, is waiting for that Canelo fight.  I am not sure if Golden Boy intends to put Canelo in against Demetrius anytime soon.

When asked who his mandatory was, he answered: “Some Rose kid, I think, from England the UK.” His last fight was on HBO but it was interesting to see him backstage at a Showtime event. Would either HBO or Showtime televise his fight with a rather unknown British fighter here in the states? Or would Andrade have to travel abroad to fight the Eddie Hearn Matchroom fighter? Either way, the 154 lb division is stacked and plentiful matchups are there to be made.