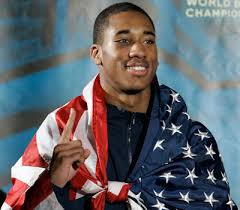 Demetrius Andrade has been idle since fighting Brian Rose last July in New York. He has since been stripped off his WBO World Jr. Middleweight title and turned down a Showtime fight against. His co-promoters Banner Promotions and Star Boxing have filed suit against Roc Nation Sports for 20 million dollars for interfering with their promotional contract with Andrade and also advising Andrade to not take the fight. The suit also said Roc Nation offered Andrade $550,000 to not take the fight.

Andrade claims he was never paid the money and has also sued Roc Nation Sports for $550,000 and former Roc Nation consultant Jeff Fried.

In a report by ESPN.com’s Dan Rafael, the details of the suit were outlined.

“After Andrade performed his obligations under the agreement by rejecting the fight, Roc Nation reneged on its promise to pay Andrade the $550,000.00,” the suit said.

“In response, Roc Nation and Fried embarked on a campaign to convince Farris and Andrade that Andrade should not sign the agreement negotiated by Star Boxing and Banner Promotions with Showtime for Andrade to fight Charlo,” the suit said. “Specifically, Fried told Farris that Roc Nation and Jay Z did not want Andrade to fight on the Showtime card and that Roc Nation, even though it did not promote Andrade, had already been negotiating with senior HBO executives about Andrade fighting on their network. Fried further stated that once Roc Nation became Andrade’s promoter, he would get a much better deal with HBO — a lesser opponent for more money.

“As a further inducement, Fried created a false fear that Charlo’s representative, Al Haymon, was very influential at Showtime and, as a result, Andrade would not be treated fairly. The proposed Showtime fight with Charlo presented Andrade, Star Boxing and Banner Promotions with a tremendous opportunity because Showtime, provided Andrade signed the bout agreement to fight Charlo, was also offering Andrade a future three-fight television deal with a fight-by-fight escalation in the rights or license fees being offered by the network.”