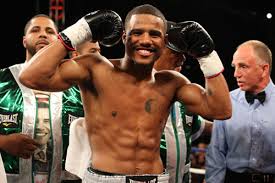 Andre Dirrell  (24-1, 16 KOs) managed to completely outclass the very durable Dereck Edwards (27-4-1, 14 KOs ). In the opening round Dirrell was boxing while coming forward, while Edwards fought off his back foot awaiting for countering opportunities. This was counterintuitive given the fact Dirrell had the clear size advantage, and was constantly landing pot shots from a distance. The narrative of the first round continued throughout the entire bout.

Dirrell continued to come forward and box from long range. He constantly got off first with his quicker hands thus allowing him to set the pace of the fight. Edwards remained too conservative, partly due to the fact that he was getting peppered from long range, and Dirrell’s quicker hands always posed a threat to him being countered. When Edwards did decide to lunge in, Dirrell’s defensive skills neutralized Edward’s offense by effectively smothering, or using subtle footwork.

In the few moments when the fight did take place on the inside, Dirrell continued to outwork Edwards while remaining defensively aware. Edwards had no answer in the entire fight. The question that was lingering in everyone’s mind was not if Edwards was going to win, but if Dirrell was going to score a stoppage. There were a few instances when Dirrell would land a solid combination and Edwards seemed to be unsteady on his legs, but he always managed to regroup himself.

In the final round a bit of drama finally emerged in the fight. Dirrell got caught with a flush left hook during an exchange. Dirrell began clowning around as if he was hurt, but it may have been to hide the fact he was a bit stunned. Afterwards he constantly used his legs and smothered Edwards’ work. Then Dirrell got caught with another flush left hook, and he began returning fire trying to keep things from getting out of hand. Edwards’ late rally wasn’t nearly enough to win the fight.

Dirrell essentially dominated the entire bout from a southpaw stance, and scored a lopsided unanimous decision. The scorecards read 119-109, 120-108, 119-107 all in favor for Dirrell.

In the post fight interview Dirrell claimed his left hand was bothering him leading into the 12th round but not to the point where it become a big factor. He also took the opportunity to call out Carl Froch for a rematch. Their first match was a close split decision in Froch’s favor, and Dirrell claims he has unfinished business with Froch.