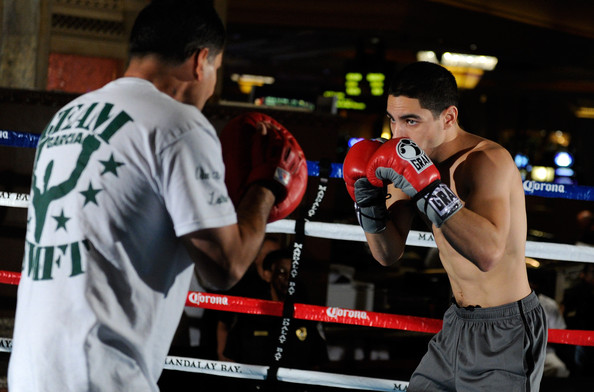 Angel Garcia is the father and trainer of Jr. Welterweight Champion Danny “Swift” Garcia. Angel and his son have a very special relationship in and outside of the ring, a relationship in which Angel does the talking at the pressers, and Danny follows it up in the ring. Thusly, Angel Garcia is pretty outspoken when it comes to the subject of his pride and joy, Danny. ThaBoxingVoice.com caught up with Garcia Sr. as he again tries to make the case for his son, who has come under fire recently for taking a fight with the unranked, unheard of Rod Salka. In his characteristically hyperbolic and animated way, Garcia Sr. boldly tries to draw a comparison between his son and Middleweight champion Gennady Golovkin.

Garcia Sr. seems to think that Golovkin’s choice of opponent in Geale was a soft touch, or only a good match-up on paper. Luckily for you, the reader, here at ThaBoxingVoice, we love to argue. We rebutted that Geale was a tough challenger with notable wins to his credit and a good standing in his division. “[Geale] didn’t look like it,” responds Garcia Sr., undaunted.

Angel Garcia is a fiery, passionate person who is all but blinded by his love for his son. Angel questions why Golovkin is so well received in the states while he and his son are overlooked. “What he ever did for this country? Nothing- and he gets red carpet and all this love,” gushes Garcia Sr. No interview with Angel Garcia would be complete without him making at least a slightly racist claim and then immediately denying that he is a racist. In our interview Garcia Sr. definitely delivers that kind of off-color commentary.

Garcia Sr. has picked an utterly indefensible position by comparing his fighter to Golovkin. We pointed out to him that knockouts, not nationality are winning Golovkin fans, but surely he has an answer for that charge as well. Angel Garcia, for all his flaws, is completely dedicated to the #1 Jr. Welterweight in the world. So far, this dedication has brought them to the top, but this is a crucial stage in their corner’s progress wherein they will have to either choose the truth or to keep deluding themselves. The august 9th card featuring Danny Garcia is lackluster to say the least.

One may legitimately question where the champion’s head is at following a gift decision against Mauricio Herrera and leading up to a spoon-feeding against Rod Salka. The Garcia corner perhaps needs some tough love, and the chance to see that the boxing world isn’t against them. The fact is that Angel Garcia can talk all the trash he wants, until Danny Garcia starts performing against world-class opposition, there will always be someone noteworthy.