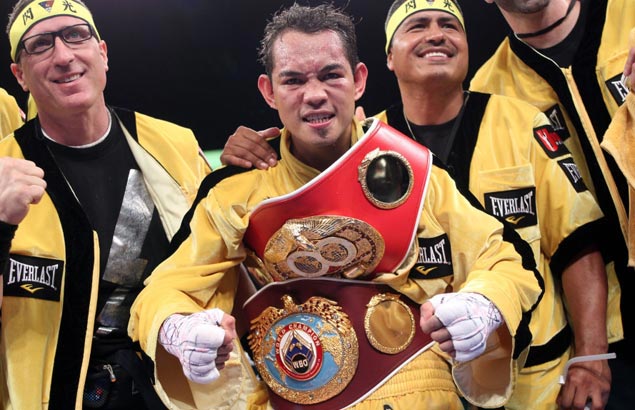 Not too long ago, The Ring TV took a poll of who the fans wanted to see Nonito Donaire in the ring with next. The result was a very striking 37% of the 8000 votes in favor of Guillermo Rigondeaux over Abner Mares, Anselmo Moreno, and Toshiaki Nishioka.

Both men have likely dates with other opponents. Nonito is on a collision course with Mexican brawler Jorge Arce in October of this year, and Rigondeaux might be a shoe in for the Chavez-Martinez undercard on September 15 against Roberto Marroquin.

TheBoxingVoice.com reached out to the head of Top Rank Promotions, Bob Arum to talk about the future of both and about a possible clash between the two.  As recently as Friday, ESPN reported that Golden Boy had made an offer to sign Guillermo Rigondeaux, whose contract was up with Top Rank. Arum isn’t too concerned and said, “They’ve been trying to get him, but the Rigondeaux fight is up to Rigondeaux, but he wants to fight on that card (Chavez-Martinez), and we expect him to fight on that card.”

The other half of that matchup, pound for pound sensation, Nonito Donaire has a bout all but secured with Jorge Arce but the date is still up in the air because of a scheduling conflict. “That fight is pretty much done, but the proposed date of October 20th is still up in the air because we haven’t finalized a venue yet, but the fight is going to happen and it’s going to be a terrific fight.”

Contrary to popular belief, Arum says he actually wants to make the fight between Donaire and Rigondeaux but he feels fights between two great talents takes time. The term “marinate” was used heavily when the talks of a mega fight between featherweights Juan Manuel Lopez and Yuriorkis Gamboa went  down the drain when Lopez lost to Orlando Salido.

Since then, Lopez has again lost to Salido and Gamboa is seemingly all but gone from the Top Rank stable.  Mentioning this to Arum, and the fact that most people feel that a Donaire-Rigondeaux fight might go down the same road as Lopez-Gamboa, Arum says, “That’s hogwash. Both fighters have potentially tough fights coming up and should they win, it’s a fight we’re looking to make at the beginning of next year.”

As a boxing fan, that news might be music to the ear. Donaire has no qualms about the fight, and it’s been the fight Rigondeaux has been chasing since becoming a world champion. The only hurdle according to most fans was the promoter actually making that fight.  Was it Donaire actually pushing the fight to his promoter or is it a prize for Rigondeaux to resign? Or is it just Arum being Arum? Whatever the case, if all parties involved want the fight, then maybe, just maybe, the fight will become a reality.