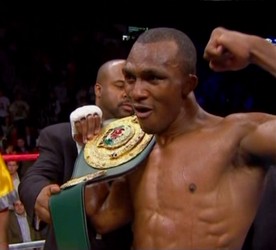 There’s an old saying in boxing to describe a fighter that’s not so good, “tomato can”.  But don’t tell guys like Sakio Bika, Demarcus “Chop Chop” Corley, and Brian Vera have been upsetting the apple card for a long time. These men are what boxing is made of.

Chop Chop has been in with the who’s who of boxing:  Miguel Cotto, Zab Judah, and also Floyd Mayweather. The former WBO light welterweight champ has always come up short. Not to say he was outclassed because he surely held his own. He nearly came close to KO of Cotto and having Mayweather hurt and in deep water. “Chop Chop”  has made a habit of late of going into young prospects backyards, and showing that even at the age of 38, he’s still can have his nights. He’s coming of a win against highly touted Paul McCloskey in his backyard which shows the heart of the old dog.

Sakio Bika, from Cameron but bred in Australia is a tough man with a rock for a chin and a solid punch. Bika is well known for being a grinder. He may not win on style points but what he lacks in the skill department, he will make up for in true grit. In order to beat Bika you have to fight his fight.  to which most of his opponents have trouble doing. But those that do best assure they paid a price. Ask Andre Ward, Wales great Joe Calzaghe, and Lucian Bute. All of those men had a street fight with Bika and lived to tell about. Bika is coming off maybe the best win of his career, a dramatic 10rd ko of prospect Dyah Davis three weeks ago. Next mission for this Aussie strong man hopefully is a date with hard punching Adonis Stevenson in enemy territory.  if I was betting, Bika is licking his chops.

Brian Vera is a rough bull from Texas that will do whatever it takes to win. His awkward style and swing for the fences with every punch mentally is why he’s always in exciting fights. He never backs down from a good barn burner. A few years ago he took on a very hot prospect at the time, Andy Lee. He was down early to only come back and stop Lee. After that fight he was in a fight with another Texan James Kirkland in which he got totally blitz. With Vera power he’s always going to be in any fight. He has a heart bigger than the state he’s from. On Aug 11 he set to take on ex contender winner Sergio Mora, in a rematch in which the first fight was a mild upset.

These are the type of fighters that won but may never show up on any pound for pound list, and may never be a world champ, but these are the guys that make up the sport of boxing. We always root for an underdog story and what better guys to root for then these three men. Some guys won’t make it to the Hall Of Fame, that’s not there place but it will always be a place for these men in boxing. Who’s your favorite blue collar boxer?