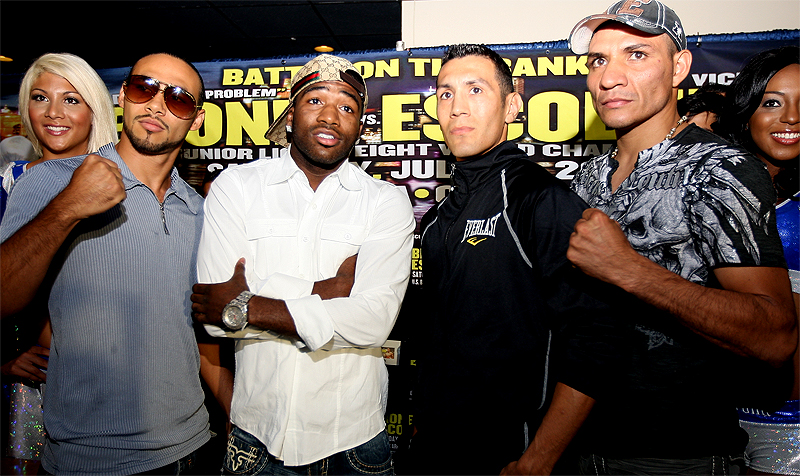 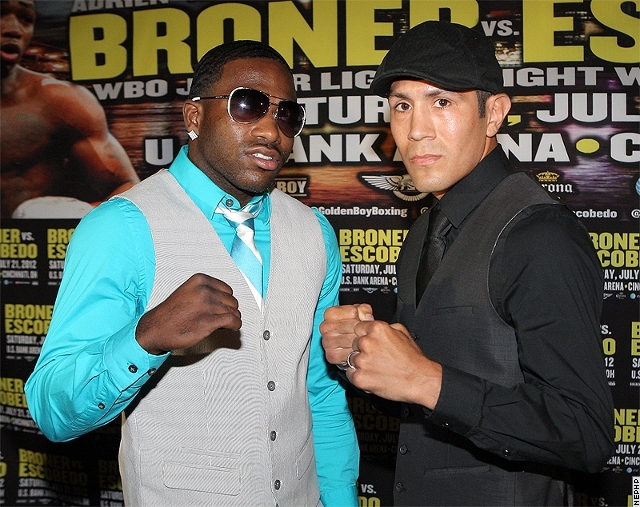 This weekend HBO Boxing puts on a good card of rising young fighters, but everything is centered on the main event when Adrien “The Problem” Broner faces Vicente Escobedo for the WBO Super Featherweight Title. Also on the card will be Keith “One Time” Thurman vs. Orlando “Latigo” Lora and Omar Figueroa vs. Dominic Salcido. The best thing about this card is it has three young fighters that all go for the KO and all maybe giving you a small peak into the future of boxing.

Flashy, cocky, confident, arrogant, multi-skilled, brass, the future, big mouth, fake Mayweather, future Mayweather, a problem, these are some of things you hear when you mention the name Adrien Broner. The funny thing about him is all of it may be true, but as long as he wins, he couldn’t care less. Broner, who currently stands at 23-0 with 19 KOs, is 1 of those fighters that really knows how to promote himself.

Whether it’s to people who love his fast hands, good defense, and power at the young age of 22 like me, or people who just can’t wait to see him get knocked out, Broner, until he loses is turning into a MUST WATCH fighter; sound familiar? After his fight on Saturday, Broner expects to move up in weight to either 135 or 140, which he can easily do since he sometimes spars against light heavyweights, but until then, he plans to put on a show this weekend.

The 30 year old Vicente Escobedo come into this fight with a record of 26-3 with 15 KOs, including 4 wins in a row and 5 of his last 6. He doesn’t have a signature win as of yet and he doesn’t have big time power to ultimately offset the speed and skill of Broner. He hopes to follow in the footsteps of Josesito Lopez and Danny Garcia, in shocking the world and picking up a huge upset win. The best thing that Escobedo can do in this fight is used the jab, since he has a 3 to 4 inch reach advantage, and try to bring this to a decision. He most likely wouldn’t win a decision either. But at least he could bother him with the use of a jab and he may avoid getting knocked out; very similar to a football team that runs the ball or a basketball team who used the whole clock, just try to get through the rounds without it looking bad.

The difference between this fight and the Lopez/Ortiz fight and the Khan/Garcia fight is one, both Lopez and Garcia have more power. Two, both of them are younger and it would be easier for them to move towards bigger fights than it would be for Escobedo. Three, Broner, has much better defense than both Ortiz and Khan. So for the people that will be rooting against Broner and hoping for him to get caught, it’s much less likely to happen than Ortiz and Khan.

However, if you’re there to just see the skill, power, and possibly the future of boxing, you may be in for a treat. I expect Broner to play around for the 1st 2 rds, turn it up in rd 3, and end it by rd 5, Broner by TKO before rd 5. The best way to describe Broner is the same way that the Chicago Bulls announcers describe Derrick Rose “Too Fast, Too Strong, Too Good”.

Also on that card will be Keith Thurman (17-0 with 16 KOs) vs. Orlando Lora (29-2-2 with 19 KOs). Thurman is another up and coming fighter that has obviously shown good power and will be looking to impress this weekend against Lora. Lora is a 31 year old Mexican fighter who has some pop and who is looking for his best win as a pro. I say this will be another TKO as Thurman finishes him off before the 6th and continues his way up the 147 lb and 154 lb ladder.

One more fight from the outstanding HBO card this weekend will be Omar Figueroa (18-0-1 with 15 KOs) vs. Dominic Salcido (18-3 with 9 KOs). If you haven’t gotten the theme by now, Figueroa is a young, 22 year old, power puncher. Now while Salcido is not old, he is an older 28 year old fighter that has lost 3 of his last 5, including losses to Eloy Perez, who Broner beat in his last fight, and Escobedo, who Broner will be fighting on this night. I’m picking Figueroa to end this before round 7 by TKO as he will soon be a candidate to get a title in the 135 lb division with a couple more impressive wins.

I have to say, if you are a fight fan that is for knockouts,  this is the card for you, as you will get to see 3 fighters; all 23 or younger that have very good power for their weight class. This is the type of card that can be very fan friendly and promote all the winners towards bigger money fights. So hopefully you fight fans can catch these fights and there will probably be no referees needed this weekend, which is something we all want to hear in boxing. Enjoy the fights.