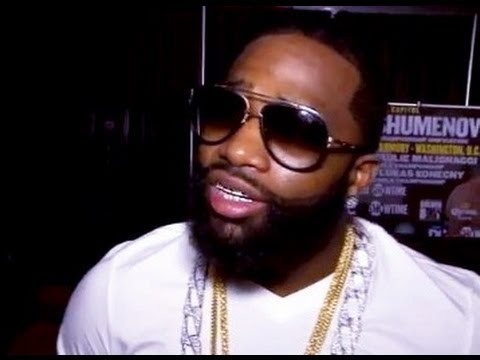 Backstage at the Bernard Hopkins – Beibut Shumenov fight in Washington DC last week. Adrien Broner was backstage giving an interview and updating everyone on his training, his mindset, and how the fight against Marcos Maidana has changed him. He was decked out with the usual flashiness, sunglasses, and jewelry, but also with a beard that he said means “It’s all about hard work”, as he trains for his upcoming bout against Carlos Molina on the Floyd Mayweather – Marcos Maidana undercard for May 3rd at MGM Grand in Las Vegas.

When Broner was asked what is something he learned after the loss to Maidana. Broner responded, “Keep ya friends close and ya enemies closer. Taking a loss like that, you learn that you got a lot of guys that like to leech off you. After that loss, I didn’t get as much calls as I used to.” Then Broner stated, “Just think, if Adrien Broner didn’t lose that fight, and you think I’m a jackass now, what would I have been then (if he didn’t lose)?  But I want to thank the lord for giving me that wakeup call and letting me know that I could give it to you and I could take it away.”

Then he was asked about his training now and if he’s ready. “I’m in shape. I’ve been working out a lot in DC and there has been a lot of ass-kicking in the gym. You going to see a different Adrien Broner, May 3rd. He then moved on to moving back down to the 140 lb division, saying, “It doesn’t matter what division I’m in, I’m going to do great, I’m going to be elite, I’m going to do great things, and 140 is looking real good to me right now so I’m going to take it over.”

When asked if 140 lb division is going to be his weight class now because 147 may have been too much for him, Broner said, “I’m doing what best for my career at this moment. You can’t say 147 was too much because I was already a champion at 147. I’m doing what’s best for Adrien Broner at this particular time of his career.”

When asked if he feels he need to avenge the loss against Marcos Maidana and if he feels he needs to be given a rematch, Broner responded, “They’re  not lying when they put this stuff out, I exercised my rematch clause so I wanted that rematch.” However, when the follow up question was asked about if he was given step aside money for the rematch not to be fought so Maidana could face Mayweather, Broner just grinned and said, “There’s just some things that’s not to be said on air, You’ll never know the inside of boxing if you not inside boxing.”

Adrien Broner is much known from Twitter and social Media, but he has been on there a lot less since his loss to Maidana. He explained that by saying, “I always talk to my big brother, my mentor, Floyd Mayweather Jr. and he told me to stay out the media’s way, stay off the internet, focus on boxing, leave the studio alone, and get back focused to what got you the fame, the name, and all that money. I was a kid, I’m growing up now.”

Depending on who you ask, Broner is either the same “jackass” that he was before or he is a fighter that seems to be back to dedicating his life back to the sport that has gained him so much fame. Nothing can be summed up better than 2 of his statements in the interview. First Broner said, “I have nothing against nobody, but when I go to any weight class, it’s about Adrien Broner. Everybody knows that Adrien Broner is at that weight class, so it doesn’t matter who else is in that weight class.” Then when asked if the loss to Maidana has humbled him, he said, “It humbled me in a way, but I’m still the same. I’m going to always look arrogant, boastful, a jackass to some people. I rub off people differently, but I’m gonna always be me.” Yes, that is Adrien Broner, always him.