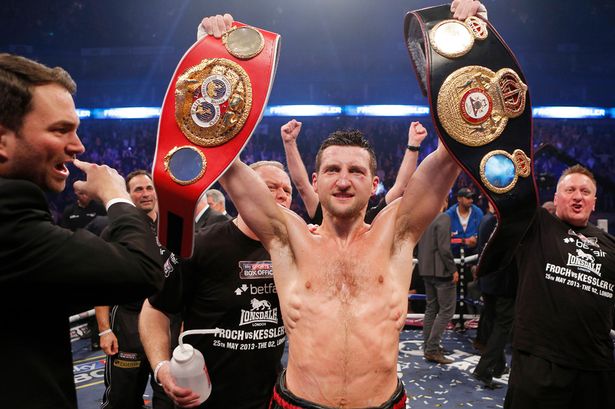 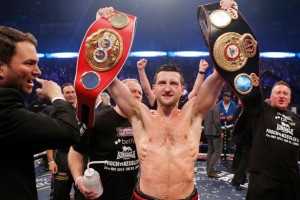 Four-time World super-middleweight champion Carl Froch has announced that he is retiring from boxing and will join Sky Sports.

Carl has brought down the curtain on a sensational career during which he twice won the WBC title, as well as the WBA and IBF belts. In 35 fights, Carl was the victor in 33 with 24 by knockout.

His final fight was his most memorable, defeating arch-rival George Groves in a rematch in front of 80,000 at Wembley Stadium.

Nicknamed the Cobra, Carl will now join Adam Smith, Johnny Nelson and other expert analysts as part of Sky Sports’ unrivalled boxing coverage. Fight fans can enjoy up to 120 fight nights over the next six years on Sky Sports including coverage of Anthony Joshua MBE, James DeGale MBE, Kell Brook and Scott Quigg.

“I’m incredibly proud of what I have achieved in boxing but now is the right moment to hang up my gloves. I have nothing left to prove, and my legacy speaks for itself. Sky Sports is the home of boxing and has followed me throughout my career. I can’t wait to join the team and help bring fans the best fighters, the best contests and the best analysis. Nothing can replace the thrill of stepping into the ring, but with Sky Sports I’ll be doing the next best thing.”

Barney Francis, managing director of Sky Sports, added: “Carl retires as a legend of British boxing, a true champion, and we are delighted that he will be joining Sky Sports. As the home of boxing in the UK and Ireland we can’t wait for Carl to provide viewers with his insight and expertise and help take our coverage to the next level.”

Carl will also contribute to the work of Sky Academy, a set of initiatives that use the power of TV, creativity and sport to unlock the potential in young people. Sky Academy aims to support one million young people in the UK and Ireland by 2020.

In May Sky Sports extended its partnership with Matchroom Sport until 2021, offering up to 120 nights of live boxing over the next six years.

The new agreement will bring even more exclusively live access to one of the strongest stables ever seen in world boxing. Only on Sky Sports will viewers be able to follow the next generation of British boxers including James DeGale MBE, Kell Brook, Lee Selby, Kevin Mitchell, Scott Quigg, and Anthony Crolla. Viewers will also be able to watch gold medalists Anthony Joshua MBE and Luke Campbell MB, two of Britain’s most exciting sporting prospects.