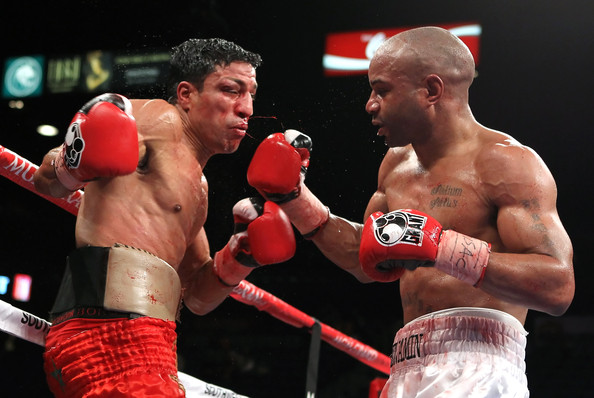 I recently had the pleasure of interviewing welterweight Carson Jones and he gave be some insight on how he became a fighter, and his mentality going into his upcoming fight next week with Kell Brook (27-0 with 18 KOs) for the IBF International Welterweight Title. That title fight against the undefeated Brook, will take place in Brook’s backyard in the UK, which is something that Carson has made it very clear that he doesn’t mind, and in fact likes, doing.

Carson Jones (34-8-2 with 24 KOs) was born and still lives in Oklahoma City, Oklahoma and he has an interesting story on how, and why he decided to get into boxing. When I asked him why boxing? What drew him to the sport? He responded, “I wasn’t good at other things, I went and saw the movie Ali with Will Smith”. I guess Carson finally found what he was meant to do because he is definitely good at boxing. He had his 1st pro fight 3 years later in 2004 and so far has had a very successful career for a 25 year old.

Jones, unlike most fighters who usually get bigger, has actually gone down in weight. He has had a few fights at 160, so I asked if he uses that as an advantage, pretty much fighting at 147, with the power of a 154 lb or 160 lb fighter. “Yeah, most of my fights were at 154 and I’ve been at 147 for 2 years now and so far I’ve been knocking everyone out,” said Jones. Being a naturally heavier fighter has seemed to intimidate his opponents, when he shows them his power, as he comes into this fight with an 8 fight win streak, with none of them going the distance.

This is Jones’ 1st fight outside of the US, but he doesn’t seem to care, and actually likes playing the villain role, as he said, “It’s always sweeter to beat someone in their own backyard”. I asked if he’s weary of the judges and not getting a fair decision out of them with it being in the UK, but he gave the answer that every fight fan wants to hear, “I don’t plan on leaving it up to the judges”. Brook has come out and said that against Jones he has to be nastier, possibly getting more physical. When questioned about those comments, Jones just responded with, “I’m always nasty”.

This fight is looking more and more like it’s going to be a slugfest and a very exciting fight next weekend. Both Jones and Brook are ranked in the top 4, 3rd and 4th respectively, for IBF welterweight ranking, so I suggest that if everyone can, they should try to catch it. Jones said, “Don’t miss this fight because I’m going to his backyard and I’m going to knock him out.”

Fans can reach him on his Facebook page with the name “Carson.Jones.77” and he’s not on twitter all the time, but you can also reach him on Twitter with the handle “@Carson_Jones1”. Until next time, enjoy the fights.