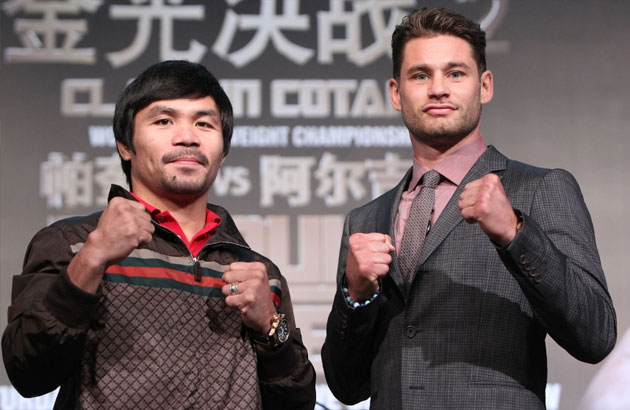 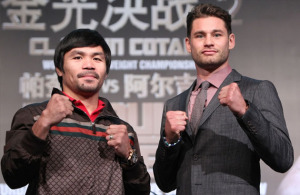 Unbeaten ace Chris Algieri has hailed Manny Pacquiao as ‘one of the greatest fighters ever’ but says he is ready to upset the boxing legend this weekend.

The pair do battle at the Venetian Resort in Macau, live and exclusive on BoxNation, as Filipino hotshot Pacquiao puts his WBO welterweight belt up for grabs against the slick Algieri.

The New York fighter sprung to prominence this summer following his gallant victory over the feared Siberian Ruslan Provodnikov, capturing his WBO light-welterweight world title despite having been down twice in the first round.

Now, though, Algieri, who has a noticeable size advantage, admits that he is stepping in against one of the best to have ever laced up the gloves but is confident that he can shock the boxing world once again.

“I’m tall for the weight class. I am built to go in and stand in front of the man and trade bombs – why would I do that? I’ve got length, I’ve got reach, I’ve got speed; I’ve got footwork and defence, but that’s not what’s going to be the difference in this fight,” said Algieri.

“It’s not a tall guy versus a short guy – it’s Chris Algieri versus Manny Pacquiao. It’s what I bring to the table versus what he brings to the table. I think a lot of it has to do with my mental preparation and mind going into this fight as well as what we know from Manny.

One man who has not been too impressed with Algieri has been respected trainer Freddie Roach, who was in Provodnikov’s corner the night the 30-year-old upset the odds and will once again be plotting his downfall, this time with Pacquiao.

The Hall of Fame coach has labelled Algieri ‘a runner’ and been critical of the Long Island native’s skill set, something which has left the challenger unaffected.

“For one, he is wasting his time because I don’t even read those reports. So that’s the first thing. Secondly, I hear about them from other people around me and it doesn’t make a difference to me,” said Algieri.

“It seems kind of odd for him to be coming out so much and saying so many different things and everyday it’s a new thing. But like I said, I don’t read them and I don’t care about them and it doesn’t make a difference come fight night.

“I would imagine it is some kind of strategy, a kind of mental game or whatnot. Freddie’s been around a long time and maybe this has worked for him in the past but it’s not going to work on me,” he said.

The educated Algieri, who holds a master’s degree in nutrition from Stony Brook University and is looking to enrol in medical school in the future, can’t believe his sudden rise to the top, having amassed a steady 20-0 record.

“It’s zero to one hundred and that is just the nature of the game. I told my mother a joke the other day and she said ‘Chris, it’s just the way you said it would happen.’ It’s nothing, then boom!

“It is a full on sprint. It’s the nature of the business and I’m not surprised by it. I’ve been watching this sport for years and I have seen it with other fighters,” Algieri said.

“I knew my time would come I just had to stay focused and disciplined and if you work hard good things happen. I am right where I am supposed to be,” he said.

A victory over the ‘Fighter of the Decade’ in Pacquiao, however, will catapult Algieri onto a level even he couldn’t have dreamed of a year ago.

Looking ahead to his impending challenge, he has guaranteed an entertaining fight when he steps between the ropes this Saturday night.

“I feel like I fight an aggressive style – smart-aggressive. I would have been more aggressive in the Ruslan Provodnikov fight if not because of my eye early in the fight.

“Don’t be confused with my style just from that one fight, because I know a lot have only seen that one fight. I am an aggressive style boxer and I will be in there to mix it up, but it’s going to be in a smart way,” said Algieri.

“I box but I have never heard anyone say that I was a boring fighter or that they didn’t really like watching my style. I use a lot of the sweet science as they say but that sort of stuff is exciting to watch. I throw a lot of punches. I am an active fighter.

“All of my fights have been exciting, even the lopsided ones. I think I go out there and fight in the manner that works best for me getting a win and it just so happens that it’s good to watch,” he said.