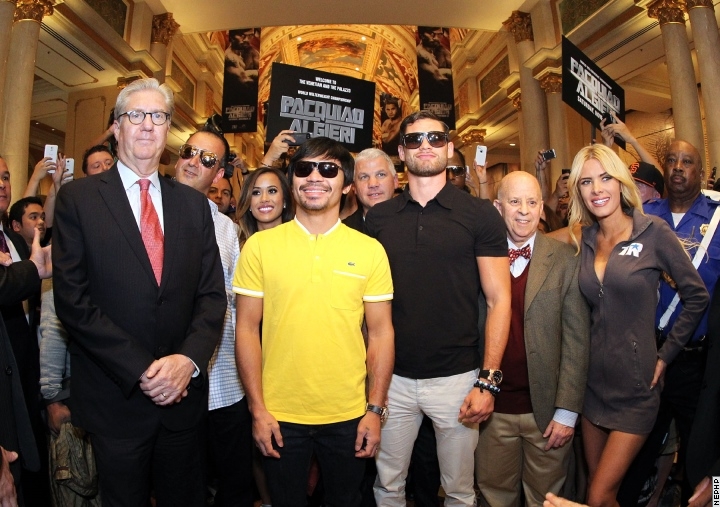 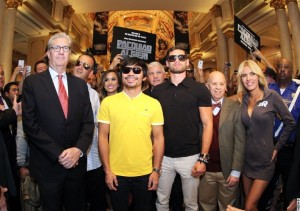 We’ve heard so much about how big of an underdog Chris Algieri will be when he steps into the ring with Manny Pacquiao on November 22. It’s become part of the narrative of this fight about how Algieri has been in this role many times before and has overcome the odds. He is basically being cast as a modern day “Rocky.” While it’s true that, yes, he has overcome the odds on many occasion, one thing must be duly noted. He has never done it on this big of a stage before against this type of fighter. When asked how he feels about the situation Algieri said, “It feels great. This is what I’ve been wanting for years now, and I’m the type of guy that steps up to the plate when I need to, so the bigger the show the bigger I’ll be.”

One of Pacquiao’s strengths in the ring that seems to separate him from just about all of his opponents is his speed. Will it be a problem for Algieri? “I’m a fast fighter as well, so I’m going to utilize my own speed plus my use of the ring and height advantage and range advantage to neutralize his speed. I would say the jab is the great equalizer.”

The names Pacquiao and Mayweather seem to be forever linked and neither man can go through a fight promotion without the other’s name being brought up. Algieri believes it’s to be expected, and he says he is not bothered it. “I don’t feel distracted about all the Mayweather talk because that’s been going on long before I was even involved. Whenever Mayweather is involved it’s always a big deal, so of course people are going to bring it up. I know Manny is a great competitor. He is going to be focused on our fight November 22. Mayweather will still be there for either one of us, so we’ll see after the fight.”

Although Algieri has been the underdog before, the odds have never been stacked this high against him. Pacquiao is listed as a twelve to one favorite over Algieri. The oddsmakers see Algieri as a longshot. Most fighters would feel disrespected if put in the same situation but not Algieri. “I’ve been the underdog many times before in the past, so I think if I was the favorite I’d feel more uncomfortable. This is home for me.”

If he is able to pull off the upset what’s next for Algieri? Does he stay in the red hot welterweight division or does he go back down to a stacked junior welterweight division? “I’ll see what the landscape looks like after the fight. I’m a boxing purist. I wouldn’t mind going back down to 140 and unifying the titles there. We’ll see, like I said what happens after this fight and what the boxing landscape looks like.”