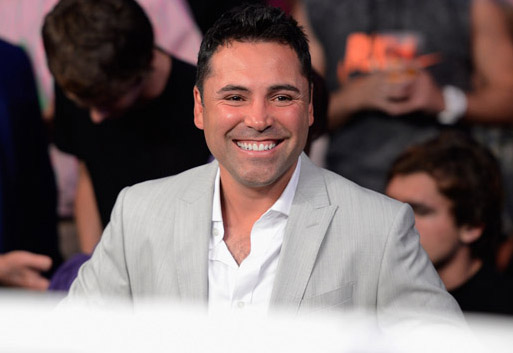 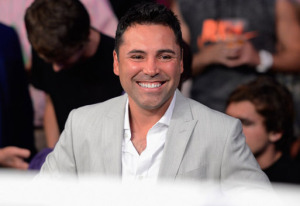 Well things are getting awkward aren’t they? As reported by Scott Christ of BadLeftHook.com, Oscar De La Hoya took to Twitter to mock the Showtime card by asking who was going to watch HBO’s Boardwalk Empire? Showtime Sports face Stephen Espinoza responded by asking a rhetorical question “You love the show so much that you didn’t know it ended last week?”  The bickering ended with a final shot by De La Hoya stating he flipped the channels and thought he was watching ESPN [level] fights i.e. club fights.

So what does this mean? Well, for starters De La Hoya is still promoting a show under the Golden Boy banner on Showtime on December 13th of this year making for a dicey situation, but a bigger one lingers. Is De La Hoya an advocate for the fans getting good fights or a man who ran out on a network bitter over the situation as a whole and creating a new cold war.

So did De La Hoya change at all and is he trying to adapt to a modern business model of boxing to accommodate boxing fans who feel alienated by the Al Haymon regime which has created a stark 2014? Well, no one knows? It is clear though that De La Hoya’s move to HBO is not just for the good of the sport, but also out of vendettas against people who worked against his best interest.

This is not the first time De La Hoya openly mocked a Showtime card as he left earlier for the Danny Garcia vs. Rod Salka card which was heavily criticized. De La Hoya this week is co-promoting an event with Bernard Hopkins taking on number one challenger Sergey Kovalev in a fight that could very well determine the number one fighter in the light heavyweight division. It is also interesting to note that the first Golden Boy Promotions fighter versus Top Rank Promotions fighter will fight on the card as Luis Carlos Abregu will face Saddam Ali. This marks the first collaboration between the two promotions since the truly dreadful purse bid forced fight between Erislandy Lara vs. Vanes Martirosyan.

It appears De La Hoya may be a changed man, but at the sametime all change is not always good as the change could signal more of the same, fights we the fans want to see not happening. It appears as the cold war ended between Golden Boy and Top Rank, a new one formed with HBO and Top Rank, and more so Al Haymon versus anyone who has crossed him.