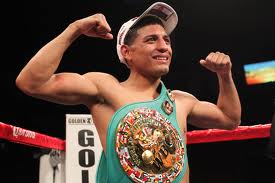 Abner Mares has been on a real hot streak as of late and after his most recent devastating performance over former WBC Featherweight Champion Daniel Ponce De Leon, in which he claimed De Leon’s title, it’s very hard to bet against him.

Going into that fight many people wondered how Mares would handle moving up from 122 lbs to fighting at featherweight for the first time in his career. A lot of us weren’t sure if he would be able to deal with the heavy handed and presumably bigger De Leon’s power. Well needless to say he proved us wrong and ended up being the one with the heavier hands, as he was able to score two knockdowns en route to a ninth round stoppage over the former champion.

This Saturday Mares finds himself in another match-up against a heavy handed Mexican, former WBC Featherweight Champion Jhonny Gonzalez.

Despite the fact that Gonzalez has many early round knockouts on his record, he has also been in many tough wars as well. He doesn’t mind taking a few punches to give a few of his own in return. In other words he welcomes a war, but one has to wonder at thirty one years of age, with fourteen years in the sport, how many more wars can he take? Gonzalez only knows how to fight one way and that’s to move forward and try to get inside and land that big bomb.

Mares on the other hand has shown a lot of versatility throughout his career. Although he doesn’t mind mixing it up a bit, he has the ability to box on the outside as well as war on the inside in the trenches. He frequently switches back and forth while keeping his opponents guessing which way he will fight them at any given time, which is something I feel he will be doing with Gonzales on Saturday night.

Although Gonzalez is heavy handed, Mares has the advantages in speed and athletic ability to go along with his superior boxing ability. Those advantages should prove to be too much for Gonzalez, who has had a rough fourteen year career.