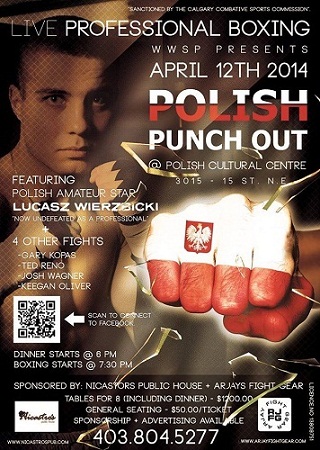 On April 12th the boxing world will be a buzz from fights happening all over the world, especially in the U.S. North of the border in Calgary, Alberta will play host to a showcase of some of the brightest young talents in the sport in an event titled Polish Punch Out which will feature Polish welterweight prospect Lukasz Wierzbicki (2-0) taking on Lee Laquette (3-2, 2 KO’s) in a six round welterweight bout.

In the co-main event, Gary Kopas(4-7-1, 1 KO) and Ty McDougall (2-4-1, 1 KO) will face off for a third time in a six round light heavyweight bout. Each fighter holds a victory over each other and will come into the trying to prove who the better fighter out of the two is.

Ted Reno(3-8-2) vs. Behrang Yousefi (debut) in a six round junior middleweight bout.

Keegan Oliver (debut) vs. Todd Molineaux (debut) in a four round