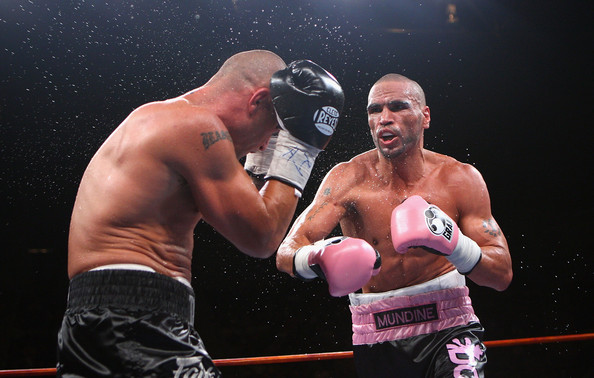 A 12 year veteran with speed, power, craft in his sport and an undeniable drive to be great. That’s a quick sum up of former 3 time champion “The Man” Anthony Mundine (43-4 25 KO’s). This Saturday at the Palms Casino Resort in Las Vegas, Mundine takes on journeyman Bronco McKart (54-9 32KO’s).

With Mundine turning pro in July of 2000 at the age of 25, after only 4 amateur fights, he and his camp wasted no time getting on the road to a world title. “I fought a world class fighter ranked top 10 in my 4th fight, and I won the Australian national title in my 5th fight,” Mundine said. He managed to win the PAPA super middleweight championship in his 6th fight, then the IBF Pan Pacific super middleweight championship in his 9th. So 3 Championships and 10 wins with 8 KO’s landed him a world title shot. In December of 2001, he took on Sven Ottke for the IBF super middleweight title. Over the first 9 rounds “The Man” was clearly ahead, but in the 10th a right hand to the temple ended the fight and Ottke, retained his title.

It wouldn’t be long before getting another crack at the title. In early 2003, he had his chance at the WBA super middleweight belt, this time things would be different as he scored a unanimous decision over Antwun Echols. Mundine defended that title once then lost it to Manny Siaca in a split decision. He dusted himself off and after beating fellow countryman Danny Green in a WBA super middleweight title eliminator. He climbed back to the mountain top and defeated Sam Soliman finally getting his WBA title back. He defended that title 4 times before vacating it to make a move down to middleweight, where he won the IBO middleweight title in just his 2nd fight in the division.

After a short stay at middleweight and one fight at super middleweight sandwiched in between, Mundine again went down a weight class. In his light middleweight campaign he suffered an upset loss to Garth Wood, which he immediately avenged next fight. 6 months and 2 fights later, he won the Interim WBA light middleweight title, which he was later stripped of this year. Over a decade in the ring, a 43-4 record and multiple championships for most would be enough. But Anthony Mundine isn’t quite finished yet.

Bronco McKart is next on the list. Former IBF light middleweight champion McKart is a 41 year old fighter, who is best known for his trilogy with Winky Wright (all loses), and his KO loss to Kelly Pavlik.

Even though Bronco has 9 loses Mundine won’t be taking him lightly, saying, “He’s crafty, he’s very crafty, he’s obviously experienced and he’s seasoned. So it’s going to be hard for me to get to him the way I want to get to him. So I’m going to have to break him down and adapt to his style once we get in the ring”.

The style that will take some adapting to is the fact that McKart is a southpaw, and in many cases is awkward for orthodox fighters. When asked if the preparation for a lefty would be a difficult adjustment Mundine stated, “Yea, I mean I’m not used to them. Well luckily, I fought Rigoberto Alvarez in my last outing, in Australia. He’s a southpaw and I fought him for the WBA interim super welterweight (light middleweight) title and went up pretty good against him. And when I spar southpaws in general I do pretty good, I’m pretty comfortable. I’m not like a lot of fighters where sometimes they can be a bit tricky”

Most of Anthony’s training for this fight took place in his native country of Australia. 2 weeks ago he made the move to Las Vegas to train at the Mayweather Boxing Club. A heat problem at the club forced him to move his training camp to an aerobic studio at the Palm’s Casino Resort. “Coming from winter to summer that was pretty tough, then I caught heat stroke one day when I sparred at the Mayweather gym, it was just so hot in there man, it was like 120, 130 inside the gym and I wasn’t used to that,” Mundine said.

This weekend will be Mundine’s first fight in the U.S.A. There won’t be any red carpets rolled out for him due to controversial, but as Anthony says misunderstood comments made about the Sept. 11th attacks. In October of 2001, he was quoted saying,” They call it an act of terrorism, but if you can understand religion, and our way of life, it’s not about terrorism. It’s about fighting for God’s law, and America’s brought it upon themselves.”

Those are some strong words about a terrible day in American history but Anthony wanted to let it be known that those words don’t exactly depict how he feels today about the subject. “At the time, when it was, 10 years ago they caught me at a raw moment where it just happened, I just spoke my mind. The thing is here man; I wasn’t talking about the innocent people getting killed on 9/11. All those people suffering and their families suffering. It was bigger than that. Ask yourself the question why is there war first of all?  It’s not just innocent people dying, you have soldiers dying, and you have kids dying. I wish we can live in peace and harmony to be honest, I’m antiwar,” Mundine stated.

Even with that being said, the crowd will most likely be against Mundine and rooting for the American McKart. That doesn’t seem to faze Mundine saying,” They are probably going to be against me, as far as the crowd goes. But when we are in the ring the crowd can’t help him.”

Though he seems to be a changed man outside the ring, inside the ring he still has the same mentality. He still has his eyes on a world title and being considered the best. McKart may be a tailor made opponent for Mundine’s escalator ride to the top, but it’s a path that has to taken. “I’m here to shake the world, I want Floyd Mayweather and this is my first step on my way to get him. I really believe I’m on that level. When you guys see me fight your going to see I’m like the modern day (Sugar) Ray Leonard, stylistically I’m like that. I have the heart of a lion; I’m appealing to the eye. I’m very charismatic, flamboyant and have the personality to match.”

Without fighting again Mundine would be considered one of the top Australian boxers of all-time. He’s the country’s biggest PPV attraction ever. He has taken on and beaten some top Australian fighters like the above mentioned Danny Green and Daniel Geale. To be considered amongst the top isn’t enough for him though. He wants to be the cream of the crop, the best boxer in the history of his country, and to be mentioned with the all-time greats in boxing period. “With the right fights and the right wins I’ll surpass from my country. I believe I’m in the gist of it now. I want to become the first man in history, not just Australian but boxing history to win titles in 3 divisions descending in weight, super middleweight, middleweight and now super welterweight. Now after I achieve that, which I will, that alone sets me apart from anyone else”.

After an opponent of McKart’s level, he’s going to need better, bigger names, to be next if the path to Floyd is truly what is wanted. Anthony also mentioned, “I want to get in with the Cotto’s, I want to get in with the Alvarez’s to get to Mayweather. Mayweather is the top of the bunch. Then you have your next level which is the Cotto’s, the Alvarez’s, and guys like that. I would like to showcase my skills against one of them, because if I was to beat one of them, they are going to have to look at me”.

Yes “The Man” realizes it’s going to be a few fight process to get to the P4P king, Money May. The next best fighters will have to be beaten to get him there, but will a win against a journeyman like McKart get Mundine a date with Cotto or Canelo? Or does fighting a guy like Austin Trout put him in a better position? “Yea Trout’s on that level but for me he hasn’t beaten anyone known, his quality of fighters hasn’t been anything to talk about. So if he can beat somebody, that will definitely be a fight I would look at,” stated Mundine.

If someone said to you, a boxer was 37 years old, 12 years into such a brutal sport, and 47 fights deep the average fan would think wow, that fighter is in the twilight of his career. When you ask Anthony Mundine about that, he confidently says, “To be honest the way I feel with myself and my body, I’m at the top of my game now.”

Cementing his legacy with another world title and a fight against a certain someone is the goal. His journey definitely isn’t over. The book still has a chapter to be written. I could try to write an ending myself but Anthony Mundine said it best,” I still feel today that if I fought King Kong and beat him they will still say something about that. There will always be a critic saying something. So that’s why I say give me Mayweather, just give me Mayweather. I know I’ve got to take steps to get to him, but give me those steps to get to him, and we will see what happens.”