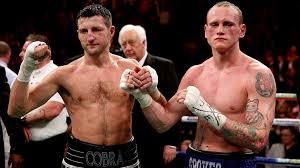 British boxing is buzzing in anticipation at the announcement of the stage for what appears to be the biggest British fight for years.
The historic Wembley Stadium has been picked as the suitable location for Carl Froch and George Groves to go to war in what is proving to be a massive rematch.
Wembley has a huge capacity and if as predicted sales are high this is bound to be a massive crowd. There are talks of as many as 80,000 people gathering at Wembley to be part of this event. This would be truly be incredible and would create an unbelievable atmosphere.
British fight fans are known for their loyal support and ability to create fantastic atmospheres but having 80,000 screaming fans is an incomprehensible factor. British boxing hasn’t seen anything like this for a long time and the excitement is erupting already.
Tickets are set to go on sale on Monday the 10th and the true scale of this fight will be shown. It is expected that tickets will be snapped up rapidly but with such a high capacity at least there is a real opportunity for fight fans to be part of this great occasion.
The first fight was so entertaining and so controversial first time round and all the build-up this time makes the fight a much bigger affair. This fight can be more than just a boxing event, it can be an event. In a few decades time it can be one of those nights that it talked about and people ask where were you that night?
This fight goes beyond avid boxing fans and is gripping the attention of the general public. Not often does boxing get such publicity and hype surrounding it over here in the Britain and it is fantastic to see it hitting the headlines.
Froch v Groves 2 is the biggest British fight to take place for a long, long time and the excitement is ridiculous already a couple of months away from the fight. As fight night nears the buzz around boxing and our capital city of London will be like nothing seen for a long time.
Tweet