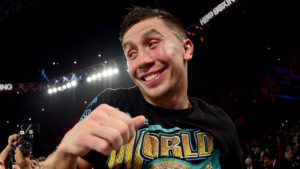 This afternoon I opened up my phone, and the first bit of boxing news that I saw was that the fight between Gennady Golovkin and Kell Brook had been finalized. I snickered at the thought and said to myself this must be some bullshit made up story. After going through a few other websites, I came to the realization that this was actually true. With so many thoughts running through my head the only one that seemed logical was what the fuck!?
From my understanding, unless I haven’t been paying close enough attention, was that Brook was going to fight Jessie Vargas. Golovkin, well he was supposed to fight Chris Eubank Jr. With reports that Eubank Jr., had turned down the fight, you would figure that someone else would get the call because there are a lot of fighters that call out Golovkin but that is not the case.
My next thought was, but Brook fights at welterweight and Golovkin is a middleweight. I don’t care what the guys walking around weight is, this is the same shit that Canelo has been pulling. If you are fighting a guy that is one division down or one division up and they are making the move that’s no big deal, it happens all the time but to go for a guy two divisions down is complete bullshit. It was bullshit when Canelo did it, and it’s bullshit now that Golovkin is doing it.
While this is a rant, I’m sure many boxing fans feel the same way. There should be no exclusion between the treatment that Canelo got and what Golovkin should get. There’s been so much talk about fighters being businessmen instead of taking the fights that matter, and this is another case, and it’s disgusting.