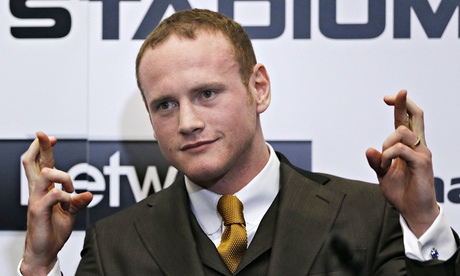 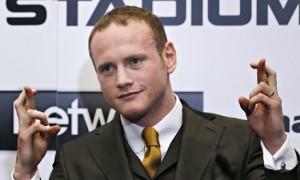 George Groves (21-2, 16 KO’s) was back to his needling ways during the press conference to officially announce the Floyd Mayweather vs. Andre Berto pay-per-view card on Showtime.

Groves has been granted a shot at Badou Jack (19-1-1, 12 KO’s) for his WBC World super-middleweight title on the undercard for this event, and it will be the first time he has contested for world honours against someone other than the now-retired Carl Froch.

As you may imagine, he hopes to go one further than those two unsuccessful attempts on this occasion.

“It will be third time lucky this time. We’ve prepared diligently. We’re ready for action.”

Throughout the build-up to both fights against Froch and earlier on in his career when he handed the current IBF super-middleweight champion James DeGale his first loss, Groves showed a propensity to get under his adversaries skin.

He makes a point of dismissing proud men, who immediately get puffed up and desire to smash his smarmy (as they see it) face in. He certainly threw DeGale out of his comfort zone en route to that win and would have done so to Froch if the man wasn’t built of bricks and steel. He was at it again here when referring to his upcoming opponent.

“I’ve seen Badou up close and personal, studied his tapes, and as of yet we cannot find anything that will cause me a problem on September 12th. So we’re looking forward to a good win. Unfortunately, we plan to take the belt back to the UK but you’re in for a terrific show.”

Even the close-by Floyd Mayweather failed to repress a smile as the traveling Brit shut down his gym mate in prosaic fashion. The verbal games have begun.

The Swedish-born champion Jack gained his current status this past April with a surprising win over Anthony Dirrell. He was two fights removed from a first-round knockout loss to the unsung Derek Edwards as he stepped in the ring that night leaving room for doubt regarding his durability against a heavy-handed fighter like Dirrell.

He put on a pressurised, pacy performance to dethrone the lackadaisical champ via majority decision, an outcome that could reasonably be more conclusive on the cards.

Jack has the stamina that Groves is believed to lack while the challenger has real power in either hand to test what he will see as a questionable jawline.

Groves must be favoured less and less the longer he allows this fight to on, but either way this is a great platform for two relatively young fighters to showcase their skills for a belt still perceived as valuable to the mass audience.