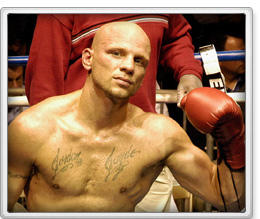 On Friday night, December 5, boxing returns to Harrahs Philadelphia that will be headlined by a ten-round WBU World Middleweight title bout between Harry Joe Yorgey and Eric Mitchell.

The show is promoted by King’s Promotions & XFE.

Yorgey of Bridgeport, PA has a record of 27-2-2 with 12 knockouts and will be looking to get up on Mitchell as they fought to a draw on July 25.
Yorgey began his career unbeaten in his first 23 bouts (22-0-1) by scoring wins over Billy Johnson (1-0), Ronnie Warrior Jr. (11-1-1), Jason LeHoullier (21-0-1) and a 9th round knockout over Ronald Hearns (21-0).
That set up a shot at Alfredo Angulo for the WBO Interim Middleweight title.
Yorgey was stopped in three rounds but has come back to go 5-1-1 since which was highighted by a 1st round stoppage over previously undefeated Zain Shah (5-0).
Mitchell of Philadelphia has a record of 23-11-2 with 11 knockouts and has fought top competition.
He began his career in 1993 and went 22-4-1 with quality wins over Tyrone Flucker (6-1), Ernest Strohman (7-1 & 8-2), Keith Lee (11-1-2), Dwain Williams (10-1), Anthony Fields (11-0), Former world title challenger Ross Thompson (24-4-1), former world champion Alejandro Berrio (19-2), & Rob Dula (15-1).
He has also fought world champions Joachim Alcine & Dmitry Pirog.
An exciting undercard is being assembled that is littered with top undefeated prospects from throughout the country.
In six round bouts:
Omar Douglas (12-0, 9 KO’s) of Wilmington, DE will take on an opponent to be named in a Jr. Lightweight bout.

Jarret Hurd (13-0, 8 KO’s) of Accokeek, MD will fight an opponent to be named in a Jr. Middleweight bout.

Steve Geffard (8-2, 6 KO’s) will fight an opponent to be named in a Cruiserweight bout.