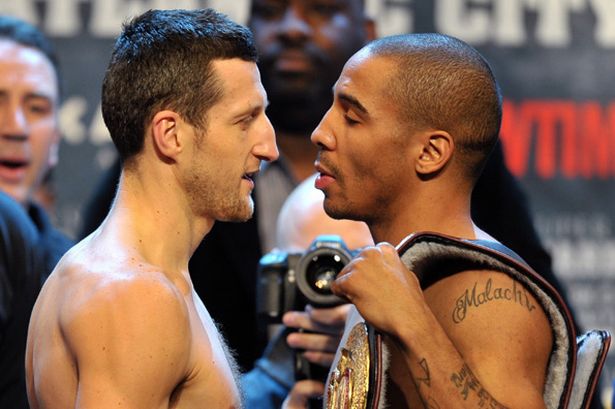 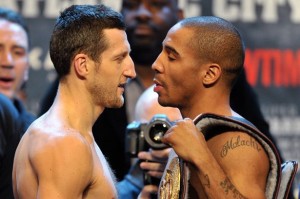 Andre Ward and Carl Froch have taken different paths since they met on that foggy day in Atlantic City to crown the best Super Middleweight in 2011. Ward was victorious that night and staked his claim as a pound for pound stalwart as he stopped the 175 lb. champion Chad Dawson at the Super Middleweight limit of 168 lbs. and then upending undefeated Edwin Rodriguez. However, Ward fought Dawson in 2012 and Rodriguez in 2013, he has not been the most active fighter to date. Ward’s problems stem from injuries and pending litigations with his promoter Dan Goosen; Ward has yet to fight this year.

Froch was beatened, not winning more than one or two rounds that night in Atlantic City. But he resurrected his career fighting an opponent Andre Ward did not see worthy in Lucian Bute. Froch upended the Romanian Canadian in May of 2012 in his home town of Nottingham, England. After a soft touch in Yousef Mack, Froch defeated his Danish rival Mikkel Kessler almost a year after he conquered Bute. He was known as the best Super Middleweight not named Andre Ward.

Many were clamoring for the rematch to happen but to add a novelty to it, to stage the fight in the a packed stadium or football field in England. The rematch never materialized then. Froch was opposed by a new challenge in George Groves, a UK rival with a chip on his shoulder. They fought in the M.E.N Arena in Manchester in a fight where Groves had put the iron chinned Froch on his back. It seemed like Groves had Froch’s number. Froch would rally and in the 9th had Groves in trouble and the fight was waived off in controversy to some.

So through much back and forth, they did it again. However this time, the M.E.N. arena couldn’t hold the two and the fight was moved to a packed 80,000 seat Wembley Stadium.  While the second fight lacked the action of the first, Froch landed a big right hand that sent Groves to the ground with his leg in an awkward position. There was no controversy this time. Carl Froch was the better fighter but even with that win he’s still considered the second best at 168.

So what about the rematch now?

“I don’t expect a rematch with Carl Froch,” stated Hunter. “Carl Froch’s promoter and his promoter’s father and Carl Froch’s brothers personally told me that they do not want to fight Andre again.”

When the question was posed to Hunter that Froch had become a bigger star since he had fought Ward and that the numbers he had drawn in England it. So maybe a trip to England wouldn’t be that bad for Ward, Hunter explained that it wasn’t all Carl Froch that did those numbers.

“As far as 80,000, it took George Groves to make that happen too, so we need to give Groves credit too,” explained Hunter. He went on to say, “Froch’s biggest crowds came when another fighter came, other than that he was fighting in Nottingham. When he went to the O2 Arena and filled it up, that’s because Kessler came. When he fought Groves, Groves promoted the first fight himself and then when you have the controversy in the first fight, that’s what set up the crowd. So you got to give Groves most of the credit. Froch didn’t push that fight; Groves forced him into the second fight. I think Groves deserves more credit than Carl Froch as far as putting people in the seats because he’s the one that pushed the second fight.”

So while the dust has been settled and it’s clear who the two best guys are at the top, Hunter feels Froch doesn’t want to fight a healthy Andre Ward.

“As far as a rematch with Andre, I don’t think that they want that, they’re quick to discredit Andre about his style of fighting,” stated Hunter. “We understand that there’s something in you that says there’s no way I can beat him. He did that to me with a broken hand and a shoulder at 65 percent strength, what is he going to do to me with a hand that’s not broken and a shoulder that’s 100 percent now?  Yeah we’re going to knock you out. He doesn’t want that.  He doesn’t want to avenge that loss and he’ll have to live with it the rest of his life. But I can respect them, if you don’t think you can do It don’t do it. If his people are in support of him not doing it, they don’t want to go through it again, we don’t expect to fight Carl Froch.”