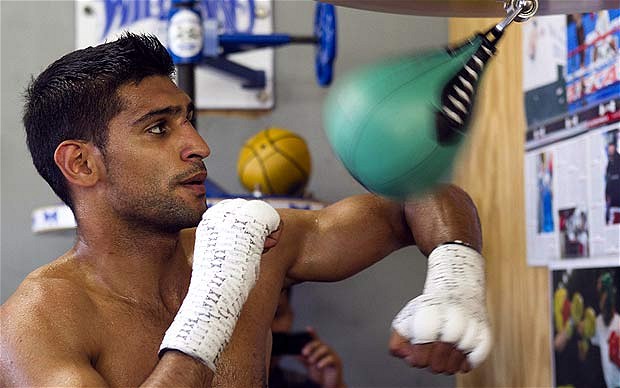 The LA Sports Arena in California will host Golden Boy’s ‘Night of the Olympians’ card on Dec 15.
The main event will be a lightweight contest between Carlos Molina (17-0,7kos) and Amir Khan (26-3,18kos).

No title is involved in this one but from Khan’s perspective, an extremely important contest nonetheless.
Perhaps the most important fight of the Bolton man’s extraordinary rollercoaster career thus far.

Amir Khan is a boxer with almost whirlwind like hand speed, great feet, a good 12 round engine, and at 25; he has every stellar attribute required to be a world class fighter.

So with these things being taken into consideration one would be forgiven for asking, why is this fight so important for Khan? Why is there no title at stake? For the real answers to these questions, let’s cast our minds back to 2004.

A fresh faced Khan had just emerged from the 04 Olympics with a silver medal. In an era when pro fighters such as Calzaghe and Hatton were flying the British flag in the P4P rankings, Amir was British boxing’s great hope to follow suit. A big ask for an 18 year old, however when people saw this young man strutting his stuff, it didn’t seem like an impossible task.
In 05, Khan turned pro, at 19 with a silver medal to his name; he was ready for the task at hand.
He immediately started raking up the wins, with slick boxing skills, and potential rarely seen in a fighter of his tender years.

However, it wasn’t long before certain chinks started to appear in Khans armory. Against Willie Limond, and Michael Gomez, Khan was forced to climb from the canvas to claim wins. Nothing unusual for a young boxer honing his craft; except Limond wasn’t a known power puncher of any sort, and Gomez was 5years past his peak. This was at Commonwealth level.

It was in the contest immediately after the Gomez win however, that the Pride Of Bolton would experience what it is really like to be in boxing big leagues. Against hard hitting Breidis Prescott, Amir lasted just 55 seconds, being floored twice, painfully by a fighter who had racked up 17 ko’s from 19 contests.

Immediately after the fight Khan parted company with trainer Jorge Rubio and joined Freddie Roach’s Wild Card Gym. Khan got back to winning ways with 8 straight victories, winning the WBA and IBF light welterweight titles along the way. His victims were becoming higher profile also: Barrera, Malignaggi, and Maidana.
Amir with Freddie by his side was now being taken seriously both in the UK and in the States. His attacking style remained almost flawless and no opponent appeared to be able to solve the eye catching Khan Puzzle. He was on the crest of a wave, and with the most successful trainer in the world in his corner, he was fulfilling his destiny.

That was until 13 short months ago, Lamont Peterson stepped through the ropes at Washington’s Convention Centre. Peterson was viewed by the press (and Khan himself) as a stepping stone to a Mayweather Super fight. Lamont however had other plans, and for 1 night only, assumed the persona of an ‘Evander Holyfield’ style pressure fighter. Khan lost the fight on points, and a few glaring weaknesses became apparent. As beautiful as this boxer was to watch, he had no idea how to handle the uglier aspects of a fight, the dark arts if you will and how to spoil and fight inside (he was deducted points against Peterson on 2 occasions for pushing).

Just 7 months later, Khan stepped back into the ring against undefeated and huge hitting Danny Garcia. Khan used everything in his slick boxing arsenal for the first 2 rounds until once again an old flaw raised its ugly head. Whether it be ego or fuelled by the belief that he can go toe to toe with the biggest hitters in the game, Amir in the 3rd round traded with Garcia, and was caught by a devastating hook. He never fully recovered and was finished in the fourth.

Afterwards he parted company with Freddie Roach all of this brings us to here. Khan enters this fight against Molina with new coach Virgil Hunter. Let’s for a moment review what Mr. Hunter has to work with; a beautiful, technically gifted boxer (boxer, not fighter) who seems, only temporarily to learn from his mistakes. He inherits a man who appears to have a seriously flawed decision making process in the ring, for example, when to move in and when to move away from an opponent (no matter how hard they are known to hit).

Finally someone who changes trainer whenever there is a speed bump on the Highway to greatness.
So this fight against Molina isn’t the be all and end all for Mr. Hunter (should Khan lose again, he still has Andre Ward to coach).  However, it may be for Khan; who now, more than ever needs to focus on the task at hand rather than a future Mayweather Meeting. Should the unthinkable happen for Khan, should he lose his 3rd consecutive contest, it’s not only top level opposition that will start to appear thin on the ground; it’s also top level trainers.