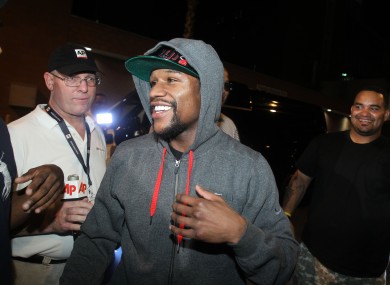 Floyd “Money” Mayweather Jr. is officially out of jail. He was released earlier this morning after serving 65 days  of his 90 day sentence for domestic battery — a charge Mayweather plead guilty to — and two other harassment charges he plead no contest. It was reported that he was greeted by family and friends, as well as associates Leonard Ellerbe, Sam Watson and 50-Cent.

With Floyd out of jail, the boxing world will be eagerly anticipating his next move(s) in hopes that he A. fights this year and B. clears up the specifics regarding 50-Cent’s newly acquired promotional license which lead to TMT Promotions. Is Floyd dumping Golden Boy? Is Floyd and 50 going to team up in an official capacity and if so what will be the structure of the chain of command?

Whichever direction Floyd goes, one thing is for sure and that is we will not be seeing Manny Pacquiao-Floyd Mayweather Jr. this year. Pacquiao is tentatively scheduled for a November  10th fight, while a December date seems more likely for Floyd should he decide to fight.

Many believe that Mayweather will indeed fight at some point this year (let’s just hope it isn’t with Josie Harris), but if you explore the evidence and reasoning of such a notion you’ll find that the likelihood of him stepping into a ring this year seems premature.

I would love for “Money May” to fight this year; however, I can’t imagine a guy notorious for being inactive over the last several years fighting in the 4 months left in 2012 and especially after being released from prison. Also, consider his limited opposition. If Khan won, then maybe it’s a bit more feasible, or if “Canelo” wasn’t already booked as well. The simple truth is Floyd doesn’t really have an obvious opponent at this present juncture.

Also, if you believe Mayweather’s lawyers (and what lawyer lies?) then you have to consider the amount of time his body will need to get back into shape, or even recover from “malnourishment” if I can be so bold. It doesn’t matter if the defense attorney was using smoke and mirrors, but the fact is I’m sure a jail stint of any kind takes some sort of recovery process. So does Floyd risk the precious 0 on his record by coming into a training camp to get into shape — something he has never been known to do — or will he take the time to nurture his 35 year old body?

Consider the fact that he probably would like to enjoy his family and freedom for a while. Not to mention get back into the normalcy of the “Money May” persona, those $100 bills don’t burn themselves.

It’s not like Floyd would have nothing better to do from a professional standpoint. I assume his fighting career has a rapidly approaching expiration date, while his promotional career is just about to pop off – especially after the reports that 50-Cent recently signed Andre Berto, Zab Judah, and Celestino Caballero to a roster that already includes Andre Dirrell, Yuriorkis Gamboa, and Billy Dib.

I’m sure Omar Henry is sitting at home waiting for Floyd to come give him the personal treatment type of signing, sort of like Oscar De La Hoya did with Omar Figueroa.

As excited as I am to see Floyd back in action, I’m equally as intrigued to see what tricks he’s got up his sleeve regarding TMT Promotions. Which fighters will he sign next? Is Al Haymon going to have a role? How flexible is HBO and Showtime going to be in the “let’s make a date” game? Is Leonard Ellerbe going to be the new Richard Schaefer?

Stay tuned because, to quote my favorite wresting announcer of all time, “business is about to pick up.”