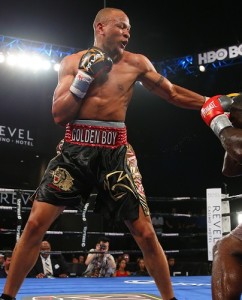 As Isaac “Golden Boy” Chilemba prepares to face Vasily “The Professor” Lepikhin in a ten-round fight for the NABF Light Heavyweight Championship on Saturday, March 14 live on HBO World Championship Boxing®, he cannot help but reflect back on all that he has been through to get himself to this moment.

The 27-year old Chilemba grew up poor in the world’s poorest country, Malawi. He lived with his mother, brother and sister in a one-room shack. According to Chilemba, “Growing up in Malawi was very hard. I grew up with a single mother, and she worked in a shop. I had to quit my education because my mother couldn’t afford it. I lived in one room with my mother, my brother and my sister. There was no bedroom. We were sitting on the floor. My mother would sleep on one side of the floor and my brother, my sister, and I would sleep on the other side on the floor. Sometimes we would not have any blankets so we would put our clothes on top just to keep ourselves warm. The other corner is where the plates and the pots would be. We would cook right there in a little square room. That was how life was in Malawi.”

In 2004, Isaac’s mother passed away after a long illness and he decided to immigrate to South Africa. He had been boxing from the age of 12 and moved to South Africa to pursue a professional boxing career. He made his professional debut in 2005 at the age of 18 and fought for five years all over South Africa then, in 2011, his manager, Jodi Solomon, suggested they try to get him some fights in the United States.

Jodi also suggested that Isaac start training with an American trainer. They looked around for a while before meeting former WBC Welterweight World Champion James “Buddy” McGirt. Isaac and Buddy began working together before his first fight with Tony Bellew in 2013. The fight ended in a split draw, and Isaac returned to Bellew’s home turf for a rematch in his HBO debut later in 2013.

Although Isaac lost the rematch to Bellew, McGirt felt it was a powerful learning experience for the young fighter, “Isaac went to England twice to fight Tony Bellew, so I don’t think you can ask for any more pressure than that.” He added, “It didn’t go his way, but I think now he knows better how to handle things now. The second fight with Bellew was in a bigger arena, and it was double the amount of people. It was a big stage, and now he knows what to expect.”

Since the loss to Bellew, Isaac won three fights in a row. In his last fight, he knocked out Cory Cummings in the seventh round on the Kovalev-Caparello undercard in August. In December of 2014 he travelled to Canada to spar with Artur Beterbiev as the Russian prepared for his fight with Jeff Page, Jr. An offer was made to Beterbiev to face Chilemba in the opening bout on HBO on March 14, but Beterbiev declined the fight. When asked about Beterbiev’s decision to turn down the fight, Chilemba said, “Beterbiev said he wouldn’t take the fight. I think it was it was too close to when we were sparring each other. I think that is the main reason he chose not to take the fight. I was ready for the fight. They turned it down, and I respected their decision because it was just a few months after we were sparring.”

Isaac arrived in the United States on February 15, and it took him some time to adjust after the long flight from South Africa; however, Buddy feels this shortened training camp is better for Isaac. He said, “I am glad this training camp is shorter than we usually do because Isaac comes to camp in shape, so after two and a half weeks together he is ready. When he comes in from the long camp, after two and a half weeks I don’t know what to do with him. We are going to handle our business on March 14.”

Isaac admitted that travelling back and forth between the United States and South Africa has been taxing for him and is considering immigrating here permanently. “I used to love South Africa. Things there are going better than in Malawi, and I enjoyed living there, but we are looking into moving to the states. It is getting impossible for me to train and prepare for the fight when I have to travel so far to get here. It takes me a very long time to get here and the travelling back and forth is killing me,” explained Chilemba.

Despite the jet-lag and shortened training camp, Chilemba believes he is ready for Lepikhin and this fight will be the next step towards his achieving his dreams, “I want to be a world champion. I am ranked #2 and, after defeating Lepikhin, I will move up and hopefully get my title shot. I am really looking forward to this fight, and I want the fans to look forward to this.”