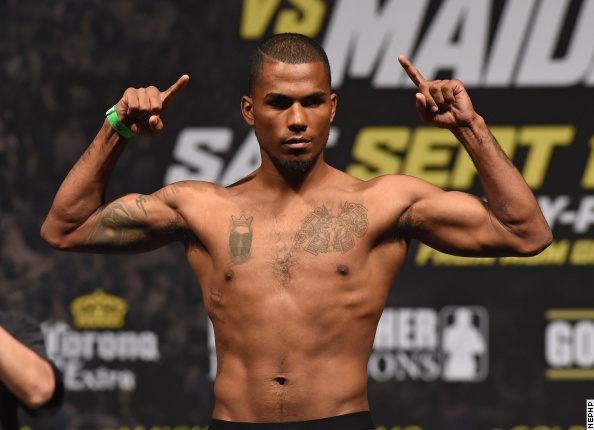 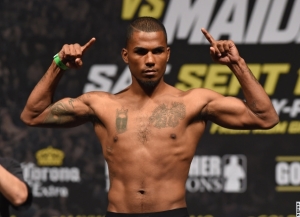 In the opening bout of the September 13th, Mayweather vs. Maidana II pay-per-view card Alfredo Angulo (22-5, 18 knockouts) hoped to prove he’s still a contender against little known and untested up-and-comer James De La Rosa (23-2, 13 knockouts). It was a match-up set to re-introduce Angulo to the fans, but it was also supposed to act as an exciting segway into the televised portion of the pay-per-view. Althought it turned out to be a rather exciting bout, it was far from the outcome Angulo wanted or expected.

In the early moments of the fight, both fighters exuded confidence as they tested each other with a series of jabs. It was long before both fighters began throwing the powers shots so many had become accustomed to seeing in an Angulo fight, but what was surprising was the fact that De La Rosa was getting the best of Angulo early and often. At first, Angulo’s shell defense was absorbing most of the blows, but soon after, De La Rosa began stringing together combinations that would lead to a few blows sneaking in and hurting the Mexican fighter.

Things really began looking bad for Angulo towards the end of round two. After having some success attacking the body of De La Rosa, Angulo’s old habits got the best of him and De La Rosa was able to land a brutal left hook that sent Angulo crashing against the ropes. Angulo manages to beat the count, but it was the kind of decisive finish to a round that acted as a complete momentum swing for the rest of the fight.

With the knockdown bearing heavy in his mind, Angulo grew increasingly frustrated as the fight continued. Adding fuel to the fire was the fact that De La Rosa was only becoming more confident as he began taunting and showboating around the ring to his opponent. This forced Angulo to continue coming forward and do his best to stop his young opponent while also absorbing a brutal amount of punishment for his efforts. Angulo’s frustration eventually got the best of him and in round seven was finally deducted a point for throwing an excessive number of low blows.

As the final rounds of the fight approached, Angulo was reminded of the significance of this fight. His trainer, Virgil Hunter, even reminded him in between rounds that, “If you don’t knock [De La Rosa] out, you’re career is over!”. The words clearly struck a chord with Angulo and rounds nine and ten saw him badly hurt and stagger De La Rosa in what seemed just short of being an absolutely incredible comeback for Angulo. Instead, De La Rosa managed to survive both rounds as Angulo failed to capitalize on his hurt opponent, and ultimately cost him the fight.

The judges awarded the unanimous decision victory to James De La Rosa on scores of (98-90), (96-92), and (99-89). Although the bout was far from spectacular it will undoubtedly be discussed as the last time fans will see Angulo on the big stage.