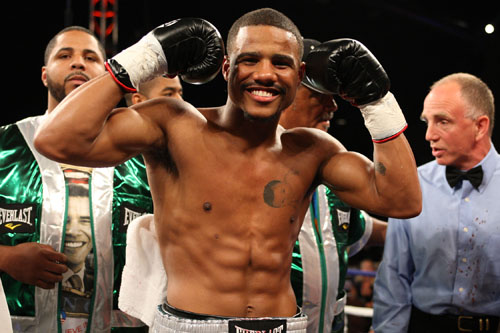 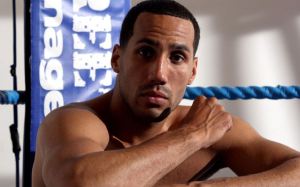 DeGale will fight for the vacant belt after Carl Froch vacated the title through injury, and promoter Eddie Hearn is engaged in early negotiations with former Froch foe and first available contender Andre Dirrell.

The Harlesden ace – who turned 29 today – landed the mandatory position in the IBF with a stoppage win over Brandon Gonzales at Wembley Stadium on the undercard of Froch’s KO win over George Groves in May, and demolished Marco Antonio Periban inside three rounds in Liverpool in November. DeGale is in the form of his career and believes that there is no possible fighter that can stop him winning the title.

“All I want to do is win the World title, it doesn’t matter to me who I have to beat to do it,” said DeGale. “When I first turned pro that was the aim, I now have that chance and I am going to take it with both hands. It’s been a long time but I can make history and I am looking forward to it.

“Dirrell is a very good fighter, a 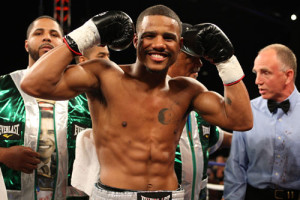 tricky southpaw and it would be an awkward fight, but anyone you face for a World title is going to be tough. That’s why I will be putting in 12 weeks of hard work to make the night easy. He does the rounds well and he’s technically good, but I could see myself stopping him later in the fight, I am capable of getting in and stopping anyone.”

Hearn revealed that The O2 in London on April 25 was the targeted date and venue for a clash with Dirrell, but said negotiations with the Michigan fighter and his team are still at an early stage.

“It’s very early,” said Hearn. “This has all happened in the last 24 hours, we will continue negotiations with his team to try to get that fight made. With a sold-out arena in The O2 and Sky Sports behind us, I think it would be difficult for them to get James to America. If that has to happen, not a problem, we’ll go over there, but we’re pushing for that fight to take place on April 25 in London and if Dirrell doesn’t want the fight then it goes down the list to the next available contender which is Gilberto Ramirez. There’s lots of work to do in the next few days but I am confident that James will fight for the World title at The O2 on April 25.”