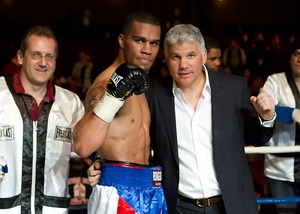 Jason Escalera is scheduled to headline an HBO Boxing After Dark card against Edwin Rodriguez on September 29. Escalera is meant to serve as just another stepping stone on Rodriguez’s road to greatness in the 168 pound division. Problem is someone forgot to tell Escalera this; in speaking with Escalera I got a sense of great confidence from him. On paper this is a complete mismatch and one can question the motives of his handlers, pitting a fighter as green as Escalera in with the likes of a well school fighter such as Rodriguez. But stop to think what if what is easily read on black and white doesn’t transcend into the ring? And his managerial team knows something we don’t? “I don’t think they’re rushing me, I think it’s a great move that my promoter and my manager are doing,” stated Escalera.

Rodriguez is a fighter that is being groomed at a paced speed, making calculated steps up the rankings. He and Jason share this in common; neither has been in a 12 round fight. This match up will mark the 7th consecutive 10 round fight for Rodriguez, something not often seen; especially from a fighter that receives such high praise from likes of Emmanuel Steward. Could his team feel he’s not ready for that upper level at 168 pound division? September 29, 2012 will be Rodriguez second time on HBO but his first time headlining. Still, Escalera is unfazed by this and feels he’s the better fighter no matter the difference in opposition either might have confronted in the past. “The advantages I bring to the ring are that I am much faster, and much stronger then Edwin Rodriguez and most of the opponents he’s already faced,” said Escalera.

Most of Escalera fights have happen in the surrounding area of his home town of Union City New Jersey; a place heavy populated by Hispanic decent. Atlantic City and Albany, New York have played homes to most of his fights and he’s expecting a good turnout of pro Jason “Monstruo” Escalera fans, but doesn’t kid himself that the Dominican native Edwin “La Bomba” Rodriguez will be the bigger Draw that night. “Well to be honest I think he has the advantage that he will have people there [Cheering Fans] ,but I’m also going to bring my people up there and they will be rooting for me. By the end of the night everyone will be rooting for me, including his people,” explained Escalera.

Cheering crowds have a way of swaying judges, but Jason is looking to impose his will on Rodriguez, having watched tape on some of Rodriguez’s fights Monstruo feels there are things he can take advantage of on fight night. “What I seen in the Will Rosinsky fight is that Rosinsky was able to be competitive, and he had Rodriguez on the ropes. That’s what I like to do I like to keep my opponent where they feel uncomfortable, and the ropes is one of those places,” added Escalera.

Where Escalera lacks in experience, he makes up in the heart and confidence department. He expressed to us that while his resume may say one thing, he feels he’s ready for the challenge. “My game plan without giving away too much is to go out there do what I have to do, see what he has, if he doesn’t have nothing, I have to take him out early. If it goes the distance it goes the distance; I’m going there to give the people a good fight for them to see,” said Escalera.

Escalera feels some mistakes were made in the past and that can no longer be the case in this fight. With the help of trainer Joe Botti, tweaks have been made things have been worked on to produce the best possible ‘Monstruo’ (which translates to beast in English).  “People can expect to see a whole different Jason, it’s not going to be the Jason from my last fight that fought Nick Brinson, this Jason is going to come and do what he got to do. We’ve been working on my jab so much, I’ll tell you when I’m sparring I have to throw at least 50 jabs before the round ends. Jabs will not be a problem this fight. I’m going to be cutting the ring off; I’m not going to be just following my opponent. The pressure is going to be the same; if I have to box I’ll box. If I have to apply pressure, then that’s what I’ll do. If I have to brawl then I’ll brawl. It’s going to be a whole different Jason that night.”

For Full Audio Of This Interview Click Here: http://www.blogtalkradio.com/thaboxingvoiceradioshow/2012/08/16/edwin-la-bomba-rodriguez-jason-escalera-orlandito-de-valle