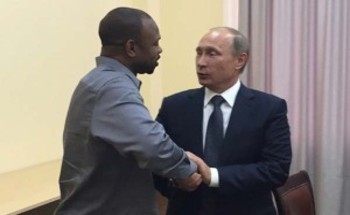 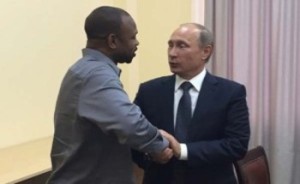 Russian President Vladimir Putin on Wednesday said that he would be happy to grant a request for Russian citizenship for former four-division world champion Roy Jones Jr. as the American visited Russian-annexed Crimea, a city that was under Ukrainian control for over 60 years before Putin had it annexed a year ago.

In photos released by the Kremlin, the world leader was seen with Jones drinking tea in Crimea’s naval port city of Sevastopol.

Jones, who was in Crimea to make an appearance on a boxing program, has fought professionally in the motherland on two occasions.

He was brutally knocked out by Denis Lebedev in 2011 and picked up a unanimous decision victory over Frenchman Zine Eddine Benmakhlouf in 2013.

“I think that if I had a Russian passport, for example, it would be a lot easier for me to come and go, because people love sports here, and I love this place,” Jones told Putin.

Putin added that he would grant Jones citizenship as long as he intends to link a significant part of his activities in the country.

“If you intend to link a significant part of your life with activities in Russia, then, of course, we will be glad and will fulfill your request to receive Russian citizenship with pleasure.”

Although the United States has castigated Russia for its involvement in Crimea’s annexation, Jones, according to boxing promoter Vladimir Khryunov, who works with Jones in Russia, said that the fighter had no questions or concerns.

Of course, Jones would be unwise to badmouth Russia in front of an ex-KGB agent.

While Putin has granted citizenship to some individuals, like French actor Gerard Depardieu, who became fed up with French tax laws, he has also banned some high-ranking American officials.

Speaker of the House John Boehner, Former Senate Majority Leader Harry Reid, and Sen. John McCain of AZ are all banned from Russia.