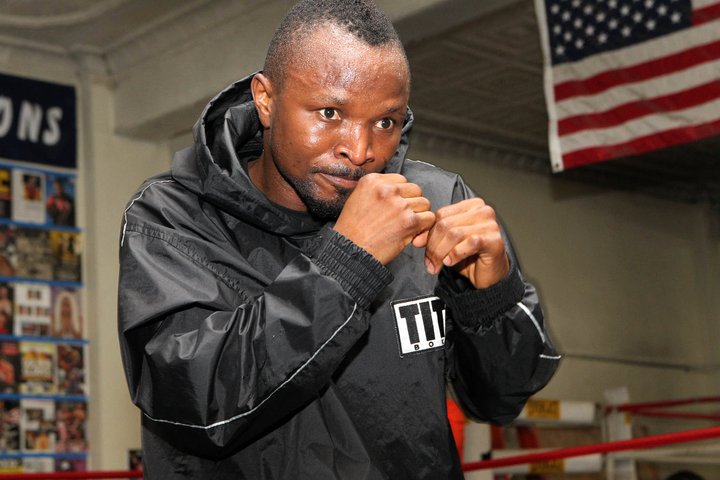 Joseph Agbeko will get to once again fight for a world title on December 7th when he faces Guillermo Rigondeaux on HBO.  The opportunity arose after Agbeko made some career changing moves. Agbeko left Don King and changed managers and couldn’t be happier.

“It’s like a career change for me,” Agbeko. “I have known Frank Espinoza for some time now and he has managed a few fighters that I have fought. He is one of the best mangers in the game. He works hard for his fighter.  He always wants to get a good result at the end. I feel happy that I am working with him because he is able to secure the right kind of fighter I want to fight. We just have to put the past behind us you know, count our blessings.”

Agbeko has been through a lot of wars throughout his career and has seen many styles but has never faced anyone with Rigondeaux’s style. How does one prepare for Rigondeaux and his style? Simple, spar and train with amateurs.

“I will be sparring amateur guys. Rigondeaux has a very good amateur style. He wants to hit you and he doesn’t want you to hit him. He is kind of technical. He always wants to go back and make sure he gets his target. I want to spar with amateur boxers to get a good feel. I know Rigondeaux is a good fighter and experienced and very technical so we are working very, very hard to take him.”

What does Agbeko have to do to win against a guy like Rigondeaux who is more defense than anything and knows what punch you are going to throw before you even throw it? Out-think him and out-fight him.

” I think I’ve been in worse (fights). I have been able to survive most wars. Fighting Rigondeaux is one of those fights. I’m not saying he is nobody. He is technical and very, very good. I respect him a lot but he is just like one of the fighters I have faced before so it doesn’t make any difference. I think I have good footwork. He uses his brain  a lot when he is fighting so I have to use mine. If he uses his more then he will beat you. I have to think more than him. I have to control the fight.”

Agbeko will arguably be the second best fighter on Rigondeaux’s record. The first fighter, Nonito Donaire. Agbeko believes Donaire is a better fighter than Rigondeaux and that Donaire made the mistake of trying to please the fans in turn he fought Rigondeaux’s fight and looked bad.

“I think Nonito is the only good fighter he has beaten in his career is Nonito Donaire. Apart from Donaire there are no other good men on his record other than Donaire. I believe Donaire is the better fighter than Rigondeaux. I think Donaire wanted to give the fans what they wanted to see so Donaire fell into his traps. Donaire couldn’t think  about himself he wanted to give the boxing fans a good show so he followed Rigondeaux to fight the way Rigondeaux wanted him to fight which made Donaire look bad.”