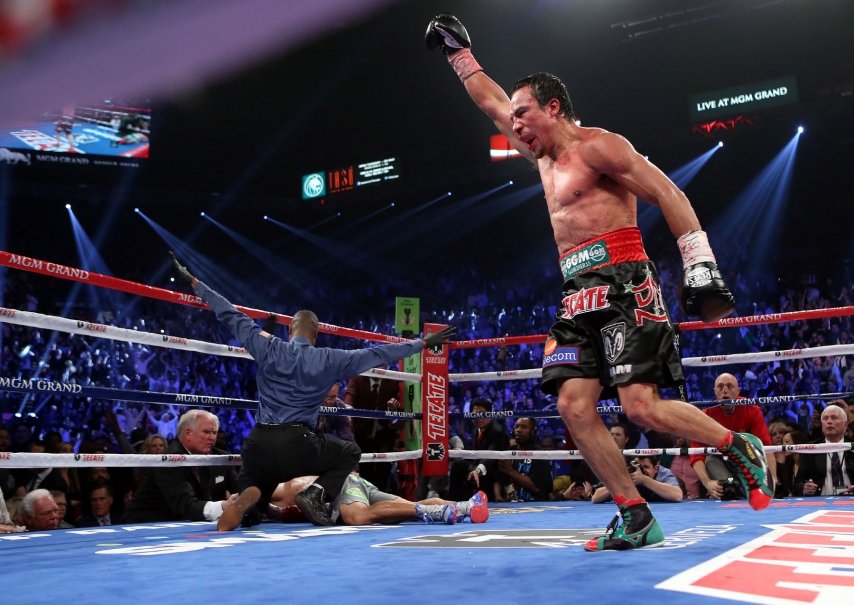 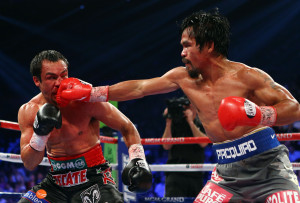 For all of the talk surrounding a potential fight between Manny Pacquiao and Floyd Mayweather Jr. and the inevitable backup plan that Pacquiao and his team will have to go with, we can take solace in the fact that a 5th fight with Juan Manuel Marquez has yet to surface.

In the current boxing landscape that has Top Rank’s Bob Arum searching as desperately as ever for a feasible opponent for Manny. You’d think that Marquez’s name would at least be mentioned despite the reality of the fight taking place.

Even if Bob and company wanted to stage another Pacquiao-Marquez promotion, it doesn’t appear up to him anymore. Marquez spent the second half of his storied career chasing Pacquiao and calling for a rematch with the Filipino fighter every time he felt jobbed by the judges’ decision, which was after every fight.

After finally achieving the outcome he’d hoped for all along, Marquez is quite content with closing the Pacquiao chapter in his career. Even if he continues in boxing with smaller paydays by comparison, not because he finally scored a knockout, but instead because he truly believes he won all four fights. For Marquez, there is no reason to fight a 5th fight with a man he beat four times.

“I think I won the [first 3] fights with Manny, and finally in the 4th fight [I scored the knockout]. I feel great because I trained very hard, and I trained on the left hook and right-hand counter punches,” Marquez told Thaboxingvoice.com.

We could get into the speculation and innuendos s 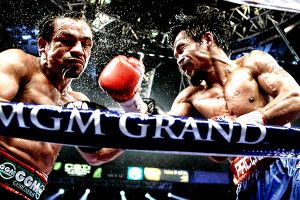 urrounding Marquez’s knockout of Pacquiao, but he is content with his preparation and no amount of conjecture will be enough to persuade him to fight Pacquiao for a 5th time, at least not on that basis alone.

There are two reasons Marquez wouldn’t fight Pacquiao again and the stand to reason. Marquez claims that he worked hard all camp and focused on the exact nature of what caused the knockout: left hooks and counter punching. For Marquez, when you execute your game plan perfectly then what is left to prove?

The other reason he won’t fight Pacquiao is because he truly believes he won every fight, which means he truly believes he got robbed every fight. Whether you agree or not isn’t the point, if you think that corruption extends so deep and obvious that you can’t envision you getting a fair shake against a particular fighter then why fight that fighter?

“I don’t think [there will be a 5th fight] because I feel very good with the victory. Plus, a lot of people know what happened in the [previous] fights. In the first fight, I won a close decision but it was a draw. [In the second fight], I won another close decision, maybe by 2-3 points. In the third fight, I won very clearly. I won all four fights, why [fight] another fight?”

Personally, I’m not a fan of a 5th fight between Pacquiao and Marquez, but I’d watch. There are two reasons why Marquez would never fight Pacquiao ever again; we’ve established those reasons. But there is one reason he would accept the fight, there is always one.

“The money, that is most important, in this case,” Marquez admitted. To be fair, he also spoke of the glory and the rich heritage of the Mexican people expecting great fights… But yeah, money. Marquez needs to get paid because he is finally working with some chips on his side of the table.

He knows that he no longer needs Pacquiao in the same way he did for the last decade. Now, he can use that leverage to become the A-side of the fight in terms of money. And yes, Pacquiao is still the bigger cash cow and no knockout will change that, but Marquez isn’t crazy to demand the lion’s share, he’s just being the diva we expect our A-sides to be. The only difference is now he gets to act on it because he earned it after that knockout.