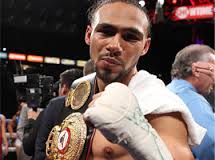 Keith Thurman has boxed a total of 3 rounds this year and is coming off an 8 month layoff. While his 2014 might not have been the way he wanted it to go, 2015 is more optimistic to the hard hitting welterweight.

“I’m looking forward to getting the big names in boxing but of course Saturday we have to take care of business. But as we move into 2015, I see that year as my year in boxing,” Thurman told ThaBoxingVoice.com.

Thurman takes on Leonard Bundu on the undercard of the Amir Khan-Devon Alexander Showtime card on Saturday. He’s an interesting observer of the main event and he has a few choice words for the two fighters Saturday.

“Right now I would call Amir Khan the most overrated fighter in the division. To me he hasn’t proven himself at a 147 lbs. He’s fought an over the hill  Collazo and now he’s fighting Devon Alexander who in reality is really 2 140 pounders fighting at a higher weight, fight a real 147 baby,” Thurman stated.

He feels the bout is evenly matched and says may the best man win.

“Everybody’s leaning towards Khan,” explained Thurman. “Statistically they have a reason to but come Saturday night, it’s going to be the man who wants it the most that will be the victorious man.”

While 2015 might be a big year for Thurman, the task at hand is Bundu and Thurman knows he must defeat him before bigger things are to come.

“It’s highly important not to overlook him,” said Thurman. “He himself doesn’t feel the age that he is, he’s confident and he’s a former Olympian. His last fight in certain rounds he was averaging over 100 punches a round. I’m ready for him.”

Thurman feels the plan is to box and show other attributes of his game but if the knockout presents itself, he will go for it.

With the cold war thawing out a bit, Thurman feels a fight with him and Tim Bradley would be tremendous in 2015

“On the chain of command on the other side, It goes down to Timothy Bradley, he fights Saturday too, so he’s fighting Diego Chaves and we’ll see how he did with a guy that I’ve faced,” stated Thurman. “On this side of the fence it’s Floyd, second best is Amir Khan. On that side of the fence is Pacquiao, then it’s Tim Bradley, that’s a fight I want with Tim Bradley.”