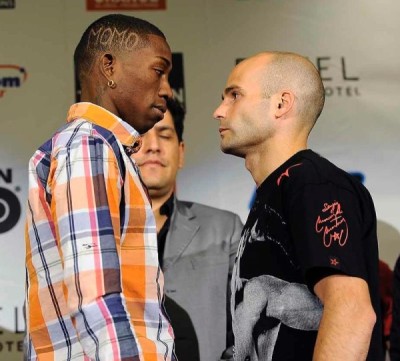 In the co-main event of HBO Boxing After Dark: Geale vs. Barker, super bantamweights Kiko Martinez (29-4, 21 knockouts) and Jhonatan Romero (23-1, 12 knockouts) engaged in a championship bout that proved to be as exciting as it was brief.

The first round saw both fighters coming forward as if they both knew they had something to prove.  However, Martinez is the first to build a bit of a points lead after coming inside of Romero’s range, and ripping body shot after body shot against Romero. Romero is quickly hurt by the barrage of blows, but somehow the champion manages to survive the round.

The following rounds were much better for Romero, but considering the outcome that isn’t saying much. To make up for opening round, Romero decided to begin coming out especially aggressive, while also implementing his superior footwork into the gameplan. Regardless of the gameplan he had adopted, Martinez came out in his usual relentless and calculated pace as he was determined to put the champion away.

There were moments where Romero’s offense and ring generalship would truly shine, but those were so hard to focus on after one began to realize that Romero couldn’t stay off of the ropes. Although his movement was fluid, it was obvious that Romero wasn’t paying attention to where his back is in relationship to the ropes. This confusion would lead to Martinez trapping Romero along the ropes and just throwing blow after blow until the champion finally moved out of the precarious position. This trend would repeat itself from rounds three to six, and nobody was more aware of it than Romero. After all, both of his eyes were beginning to swell as a result of the damage sustained at the hands of Martinez.

By round six, it was obvious that Romero wouldn’t be winning a decision at that point. This led to Romero coming out especially aggressive and going seemingly blow-for-blow against Martinez in an effort to “get even”. Briefly, this gameplan seemed to work, but just as soon as Romero had gotten something going in the way of offense, Martinez came back with his hellacious power punches and landed shot after shot until the referee was forced to intervene and call an end to the bout.

The win proves that Kiko Martinez really is as legit a fighter as they come, but now questions will arise as to the quality of champion Romero was and may become. The hopes of many ringside was that this Kiko Martinez win would lead to a Martinez vs. Rigondeaux match-up, but instead Martinez has voiced his desire to face Nonito Donaire. Regardless of who he ends up facing, Kiko Martinez has shown that he is a fighter to watch.