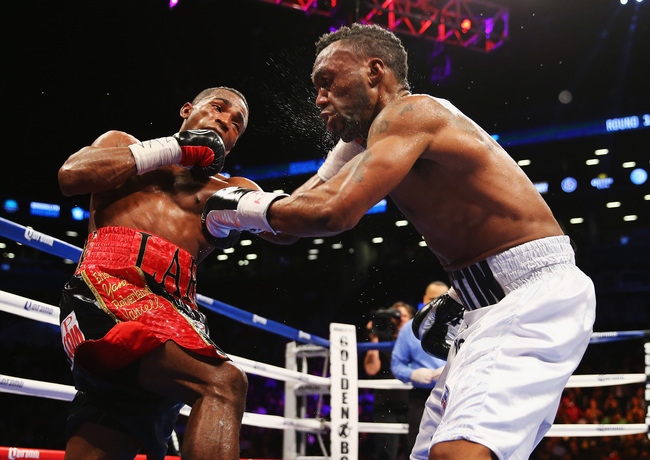 The 30 year old Cuban improved his record to 19 wins, 1 loss and 2 draws last time out against Trout and has really proved himself as one of the top fighters in the division.

When questioned on what’s next for Lara, he mentioned Saul ‘Canelo’ Alvarez. Alvarez is a huge name in the sport following his fight with the pound for pound king Floyd Mayweather earlier this year. Before the fight many believed that Canelo would really test Floyd and possibly even beat him. This was to prove untrue with a brilliant display of pure boxing talent keeping Alvarez at bay throughout the fight.

Lara believes that Canelo is the only fighter out there for him and that people are making excuses to try and not fight him. Talking of a smaller fan-base is just an excuse because he has showed what he can do and that he came to the US to fight the best. He says that he is not here to run from other fighters and wants Canelo.

Lara was asked about his style which is often labeled as being boring due to his boxing off the back foot. He doesn’t get the credit that he probably deserves yet someone like Floyd Mayweather who fights in a similar way does. Lara confirmed that Mayweather is a fantastic fighter but feels that Mayweather being American and him being Cuban is a big factor. He isn’t from the country that he is fighting in so it is naturally harder for him to gain fans.

Lara says that all he can do is keep on doing what he does in the ring and keep on winning fights. Personally I felt that Lara boxed brilliantly against Trout and that he is a very talented boxer who deserves more plaudits than he receives.

It was suggested that Lara may be more popular if he learned to speak English as it would make him more accessible to the viewers and allow them to get a greater insight into him as a person.  Lara is a slick speaker and the boxing audience would love what he says if they could actually understand him.

Lara said that he can speak some English and can have some 1 to 1 conversations with people but that because it isn’t his first language he gets a bit timid in front of the cameras. He did however say that he is going to work on that.

When asked about his training in Texas, Lara replied that every camp is important and that he had about 12 weeks preparing this time which is one of the longest that he has had. He said that it is all one big team and that they are like a family.

Canelo was mentioned again towards the end of the interview with regards to if he would wait to fight Canelo or look to fight another opponent. This is an issue as Canelo appears to be waiting to hear from Miguel Cotto on a possible match-up. If this isn’t set-up than Lara seems a viable option, Lara confirmed that he will take a rest as he has just fought and that come next year he will wait and get the fight that he feels he deserves.

So who is exactly next for Lara seems uncertain but one thing that we do know for sure is that he wants it to be Canelo Alvarez. Fighting Canelo would be a huge boost to his reputation as more casual fight fans would get to know him. Canelo is a big-time fighter and the chance of getting in the ring with him is one which Lara would love.