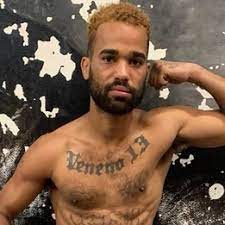 You can consider Christian “Veneno” Otero a prospect within boxing, but his 3-0 record does not fully represent his experience as a fighter. Truthfully, Otero has been fighting his entire life. The 26-year-old Harlem native has had his share of adversity in life, but it is that exact reason why he feels he is built differently than your typical prospect.

Otero is scheduled to face off against John Willoughby on July 31st at the Cosmopolitan Lounge in Decatur, Georgia. Otero considers the Georgia area a home away from home and in his last outing back on March 6th of this year he had the Jonesboro crowd completely amped. He received one of the loudest pops of the night and he played to the crowd with his unique bravado and charm.

Sharing both a Puerto Rican and Cuban background, Otero is rooted in a vast and rich fight history shared by both nationalities. His family’s roots are enough to drive his fighting spirit, but this young man is fighting for more than just tradition.

Otero donated part of his last purse to Mental Health Awareness, a cause that he believes in and one that shaped both his childhood and the man he is today.

As a child, Otero saw first-hand the importance of mental health and the significance of its awareness. He is focused on his July 31st bout, but he knows that success in the ring will bring bigger stages, thus giving him the opportunity to use his triumphs to further his cause.

“I dealt with a lot of stuff as a kid and I am all about bringing awareness to the importance of mental health,” Otero said. “I don’t regret anything because it made me the man I am today and the fighter I have always been, but I think it is important for others to realize we all have our issues.”

Otero has said he plans to donate a portion of his purse once again to Mental Health Awareness.

“I am focused on getting better in the ring, but my success isn’t just about buying cars or whatever, it is about leaving a real mark in the sport and in life. I’m at a point in my career where I’m focused on the work, but if I can help now, I will.”

As previously mentioned, Otero was a crowd favorite in his last outing. He plans to give the fans another great show, but he is also planning on using his swagger–and his gear– to pay homage to an all-time great.

“You know I can’t give away the plans for my gear,” Otero said while laughing. “Let’s just say I’m going to pay tribute to Kobe Bryant.”