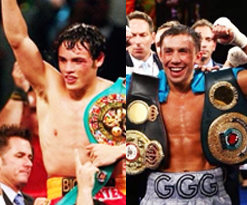 Since bursting onto the boxing landscape in September of 2012, current WBA, IBO and new WBC Interim Middleweight Champion Gennedy Golovkin, has continued to steamroll his opposition and build quite a fan base from coast to coast. Coming off his second round stoppage of an over matched Marco Antonio Rubio, fans are once again clamoring for a fighter who is perceived as elite, to step under the bright lights of the square circle to take on the proverbial powerhouse Golovkin.

Rumors circulated earlier in the year that Golovkin would face-off against the son of a Mexican legend, Julio Cesar Chavez Jr. Finally fans would get the foe that could test Golovkin’s determination and most certainly the power, which has become somewhat of a modern fable. After Chavez Jr. chose not to move forward with the fight when Top Rank was wanting a contract extension before securing the deal, the fight talk fell apart.

Now that Golovkin has propelled his way to the forefront of the Mexican fan base in California, now more than ever, fans are left holding their breath to see Golovkin take on Chavez Jr.

Although Tom Loeffler (Golovkin’s Manager) says that negotiations have not picked up again, he did say that he has been in open conversations with Bob Arum (Chavez Jr.’s Promoter).

“Bob did call about a month ago and said that there is still a chance to do that fight.”

Loeffler continued to say “Our door is always open for that fight. The reaction we got just from just the rumors of that fight when it was supposed to happen July 19th here at The Forum. If that fight would happen that would be his (Golovkin’s) first fight on Pay-Per-View and that is why we were so willing to do that fight in July.”